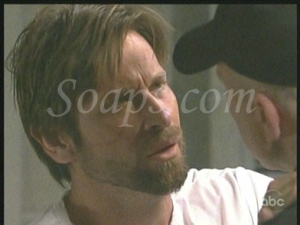 Although there were only four episodes this week, the show still managed to bring us so much to talk about. Clint almost met his maker, evictions were handed out, fisticuffs were exchanged, Marty got a clue, and, what the hell, Patrick Thornhart is alive? Let’s take a look at what stood out to me…

“I have proof. Patrick Thornhart is alive.”
I’ve never doubted that Patrick could be alive. Even though the show was casting a Patrick look-alike, and Thorsten Kaye is returning to “AMC,” there could be a chance the head writer plans to surprise fans with the ultimate shocker by bringing Thorsten back as Patrick in the end. This twist brings up more questions we don’t have answers to yet. Exciting stuff! I just wish the show would’ve utilized these elements sooner, maybe then the ratings wouldn’t have dropped so drastically over the past few years.

“I raped a woman. Her name was Marty.”
I’ve been waiting for this moment ever since word came that Roger was returning. The man who claims to be Todd has regained some memories, has escaped and is making his way to Llanview. It’s the initial look of shock from those who he approaches that I’m most anticipating. The show has kept such a tight lid on the details surrounding who the real Todd Manning is, and I don’t think it’s going to turn out that the man with the scar is obviously so. Could he be the real Todd? Obviously yes but possibly no. Could the real Todd’s memories have somehow been implanted in this man’s brain? Possibly yes. Could T.M. really be Patrick with Todd’s old face and memories? I have no freakin’ idea. Do you? Vote in my weekly poll Is Patrick Thornhart really alive to let me know. Whatever the case, I’m enjoying the ride. What a way to send the show out with a bang.

“It’s true. That bitch is alive.”
It was like a cold splash of water in Marty’s face when she found out Natalie survived the push from the Angels Square Hotel. Of course, we knew she’d want to finish the job. It was too coincidental that Natalie just so happened to show up at Todd’s and barely miss Marty’s attack on her, due to Brody coming to her rescue. It may have been risky, but Marty sneaking into the hospital would’ve been a bit more exciting. She’s done crazier things, after all. And how about Roxy? I guess she never got the Rodi’s gift certificate I put in the mail, with hopes of buying her silence to stay quiet about Brody and Natalie’s kiss, because in true Roxy fashion she went and spilled the goods. The thought of Brody and Natalie kissing had John clearly fighting the inner feelings he’s worked damn hard to keep buried. And now that he’s located Liam, what do you think John should do? Vote your thoughts in my Poll: John’s Knowledge Of The Kiss.

Knock, knock, knocking on Heaven’s door.
Clint may have escaped death but he’s still fighting to stay alive. Rex lashing out at Clint was long overdue and with things looking gloomy for Matthew, not to mention that they share the same rare blood-type, your guess is as good as mine as to what twist will come next. Here again, the word obvious comes to mind. Would the show really kill off Matthew in order to give Clint his heart? I think not.

From gigolo, to volunteer, to mentor.
No matter how you feel about Ford, I can't say it enough… This character has evolved over the past year. Yes, Ford has hurt a lot of people, and even taken advantage of Jessica and Langston, but he's not that same person anymore. I believe in second chances and believe people can change. Ford did a good deed by sharing his past experiences with Shane in order to help the boy's self-esteem. He clearly cares for Tess, wants his son back, and will do anything to make that happen. I refuse to fault the man for that. I'm not a fan of the Ford brothers, per say, but it's not often when the head writer turns such a hated character into someone I find myself fighting for.

Out on your ass you go!
Just when I thought no one could be sappier than Joey, Cutter went ahead and proved me wrong. How he could beg Aubrey to come back to him after she kicked him to the curb is beyond me. At least he came to his senses, stood his ground and cleaned house. With all the fisticuffs thrown in the process, Nigel appearing in a referee's uniform would've made the scene complete. Though I don't approve of Cutter's tactics, I don't fault him for stealing the mansion or for kicking Aubrey and Joey out. He's a con-artist. We've known this from day one and should appreciate characters for who they are. Without the bad guys, things would be pretty boring for everyone in Llanview. I will however be disappointed if Clint, a savvy businessman, didn't have some sort of loophole written in during the process of turning over the Buchanan deed.