Go ahead and ask the crazy lady.
I don't know how many times I can repeat that Marty has lost her marbles, but I think she's down to her last few. The scene on Monday in the hospital would've surely garnered more attention from the faculty, considering Marty was acting like a total nutcase, one who used to be a very respected doctor on staff. I realize doctor/patient confidentiality is preventing Dr. Buhari from spilling Marty's secret, but at least she alerted John in a roundabout way that Marty's been hiding something big. John's no fool and won't give up until he finds out exactly what that secret is. We can't forget that sooner or later, those close to John end up suffering from the current drama in his life. This will be no exception.

I still love you.
I don't see the chemistry between James and Deanna but can appreciate a good love story. Her reasoning as to why she left James is very believable and coincides with him running away from Eddie and straight to Llanview. He cares deeply for Starr, but it's clear he and Deanna had an established relationship. I'll be interested to see how James handles both women. Given this turn of events, and the impending cancellation, if I had one wish for Starr, and the Sole fans, it would be to have Cole released and brought back into the picture before Llanview goes dark for good.

Rallying for a good cause.
Fans hit the streets hard this week to make their displeasure known to ABC in regards to the cancellations. They weren't the only ones. Check out how Catherine Hickland rallied outside one ABC Studio too. I admire everyone's attempts at trying to save the show, but unless a huge miracle happens, I'm afraid the deal is done, which doesn't make the acceptance of this any easier for you or me... 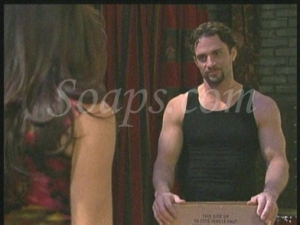 We’ve been waiting for this moment for over a month and today Todd finally woke up. I think it’ll be a bit longer before we really get a deeper look inside what’s behind Tomas’ ‘Todd Mission’ or what Todd himself, if he is Todd, knows about it. For now, let’s take a look at some of the other things that went down in Llanview this week…

Some like it hot.
Please keep Vimal in jail a bit longer. Let’s face it, he and Rama aren’t an interesting couple, but the attraction between Cris and Rama is very evident and much more fun to watch. If there’s a plan to bring a new extra marital affair to the surface, let it be between these two. Cris and Rama could explode in some hot scenes for sure. Nothing long-term, because we can no longer count on long-term as an option, but I’d like to see more sexual-tension filled, fun scenes between them.

Temporary custody.
I don’t blame the judge for not giving Viki custody of Ryder, considering her meltdown in court. I can even see him not giving it to ‘Jessica’ due to her own mental issues, but to give Ryder to Joey and Aubrey over Ford… Is the judge on Aubrey’s ‘who can I blackmail next’ list? The judge could’ve insisted that Ford move out so Tess didn’t have any contact with Ryder. To imply that he’s with Jessica for Ryder’s trust, yet not know anything at all about Aubrey and Joey’s marriage… Only in soaps. Aubrey’s move surely added a few more sparkles of admiration in Joey’s eyes. Cutter’s on to something… Aubrey’s fallen in love with Joey. What do you think? Let me know through my Poll: Aubrey’s Feelings For Joey. The head writer needs to quit wasting Cutter as Aubrey’s little lapdog and turn him into a man who takes charge. I may get my wish now that Cutter’s found something to blackmail Dorian with. I’m sick of Cutter and Aubrey running around trying to make sure their secret doesn’t come out. Either have them go their separate ways or reveal their true relationship already.

Forty years in Llanview.
I enjoyed the emotional struggle that went on during Wednesday’s special episode, even though all the back and forth between Niki, Viki, Jean while writing the recap had me suffering a headache afterwards. We got to see Viki’s mind crumble and watch the fight for sanity between her alters, which was a nice reminder of what happens to even the strongest of characters as a result of something traumatic. This has been a core storyline throughout the years. I hope the head writer also pays tribute to Erika by allowing her to remain as Viki from here on out.

Crimes committed at Llanview Hospital, again.
I can relate with Gigi’s need to want to know everything that is going through Shane’s mind at the moment, but she’s wrong to interfere in his therapy by stealing his session tape. Granted, a very coincidental mix-up happened between Shane and Marty’s tapes, so she won’t get exactly what she was after… but someone else will. She needs to take her son’s request that she stay out of his therapy to heart and take a few steps back. Shane needs her to be a supporting mother now more than ever. Though I don’t want to spoil too much, I will say that we haven’t seen the last of this bullying storyline. I hope Shane’s self-esteem builds back up and he faces the situation, and Jack Manning, head on. Let’s just hope Shane doesn’t find out that Rex was the one who sent those goons after Jack. It’s not a very good example for a father to be giving. After all, Rex is no Todd Manning.

One Life To Live Saturday Teaser Poll: Another Marriage