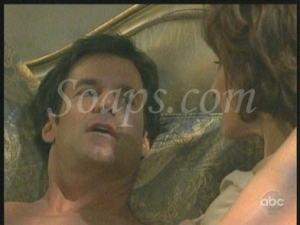 A lot went down this week in Llanview. Old rivalries came to a head, new characters hit the canvas and we can’t forget one of the biggest anticipated reunions. Let’s take a look…

You never have to be alone again.
David and Dorian truly love each other, but we all know the actor never stays in town for very long. It makes me wonder how long their happiness will last. I’d like to see David explore his Buchanan roots and have a fun adventure or two with Dorian, like they used to in the past. On a side note, props to David for being smart and not offing Uncle Clint. I never thought I’d use the words smart and David in the same sentence. Is it just me or has David lost a few of his funny taglines since returning from the Moroccan prison cell from hell?

The proof is in the porno. Really?
There’s been some crazy ways some have come across proof in the past, but come on. All of a sudden Llanview is the site for an adult film with Austin Peck’s character as the director. Rex just so happened to stumble upon the set and find out they had footage of someone leaving Eddie’s motel room the night of his murder. A bit farfetched, if you ask me. However, it makes me wonder if some of the fans weren’t on to something when they suggested Matthew might’ve killed Eddie. Matthew and Clint’s conversation today alluded to as much. I like the mystery surrounding this plot but think it’s high time the murderer is revealed. While we’re at it, let’s get to who shot Todd too!

I don’t know what I’d do without you.
Again, I can’t say it enough. I love Dorian and Viki as friends verses lifetime enemies. Their funny and sometimes emotional scenes are so much better than the repetitive cut-throat dialogue we’ve listened to for years. I get why Dorian kept Charlie’s secret. She thinks he ended things with Echo and is trying to save Viki from more heartache at a time when she’s consumed with enough already. I’m just afraid that once Viki sees that photo of Charlie and Echo kissing, she’ll never forgive Dorian for knowing the truth all along. Then we’ll be back at square one.

Give me a bucket. I’m going to hurl.
If I have to endure anymore of these lingering feelings between Joey and Kelly I think I’ll vomit. I find myself gagging every time they’re together. However, someone needs to send Joey a clue. The guy is such a sap. I can’t understand why they even brought him back to Llanview. I hope Cutter and Aubrey have a deeper secret that’s connected to others in town. It’s the only reason I can think of for keeping Joey and Aubrey around. Speaking of sickening characters… Charlie and Echo, well, they just make me sick.

What's wrong with our schools?
I've kept my political opinion to myself, but given what's happening with Shane and Jack, I will no more. As a parent, I think the rules and penalties pressed upon our children, which prevent them from standing up for themselves, is a great part of the reason there's so much bullying going on these days. I don't remember all this bullying or tattling about being bullied - at the drop of a hat - when I was in high school. There's a serious problem amongst teens today, devastating enough that some feel their only way out is suicide. If kids were allowed to defend themselves, without consequence, so many of those lost lives might be saved. My kids have been disciplined by schools for defending themselves, but I still teach them to never allow someone to physically lay a hand on them. This whole 'walk away and tell an adult when someone hits you' crap doesn't fly in my household. If anything, it feeds the bully's ego to bully more.

Jessica, is that you?
I'm not sure why they chose to have Cutter's kiss snap Jessica back into reality. Plenty of others, who have strong emotional connections to Jessica, pleaded for her to return but to no avail.

That room just won't do.
Obvious much, Rama? I get that she's blackmailing Aubrey and wants what's due to her in exchange for losing Vimal so Clint could go free. However, if she doesn't tone it down a bit, she's going to be out on her rear and checking into the Angels Square Hotel before she knows it. Aside from that, I do like her spunk. She reminds me of Kim. And after seeing her interacting with Cris, I think he'd be a much better fit for her than Vimal.

A blast from James' past.
Just as Starr and James overcame their obstacles and decided to start dating, a new girl is thrown into the mix. It's too soon to tell if Deanna is going to be more of a Hannah-like stalker or simply one of James' past girlfriends with no hidden agenda. I dare say the latter is too boring a storyline. Please vote in my Poll: Deanna's Arrival In Llanview to let me know what you think of this new character then feel free to share all of your thoughts with me in the comment section.

E!'s Kourtney Kardashian Cast On One...