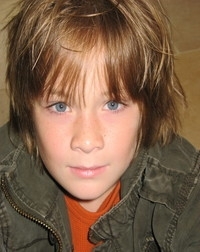 Courtesy of Clothes Off Our Back

A representative for One Life to Live cutie, Austin Williams (Shane Morasco) has given Soaps.com the scoop on some upcoming news for the young star!

Not only will fans get an opportunity to watch Austin perform out of his daytime role, but they’ll be able to bid for a chance to win something from the actor’s wardrobe as well!

First things first, come March 19, 2008, Austin will appear in an episode of the NBC drama “Law and Order” titled “Angelwood” at 10:00 PM Eastern. Although we weren’t given a character name, Austin’s face will be unmistakable to his fans who will have no trouble picking him out from the show’s cast!

We always get a kick out of seeing our favorite actors cross over to primetime, but our next piece of news will definitely touch your heart…

Recently, Austin has donated a special piece of his wardrobe for the sake of helping others to the Clothes Off Our Back charity! Besides being owned by Austin, this Michael Clayton jersey, named after Austin’s 2007 hit movie, contains autographs from the cast from stars including George Clooney, Tilda Swinton, Robert Prescott, Terry Serpico, Austin Williams, Robert Elswit, Tony Gilroy, Jennifer Fox, Steve Samuels and Kerry Orent! All proceeds will go to benefit the charity and to help a very special cause, St. Jude’s Children’s Research Hospitals!

Fans who are interested in placing a bid can do so from now until March 17, 2008 at the Clothes Off Our Back website!

Soaps.com wants to commend Austin for opening his closet to help those in need, especially for this particular cause, which has helped tons of children and their families throughout the years! We wish you the best in your upcoming new role and hope your jersey receives numerous bids!

One Life To Live Dispels Casting...