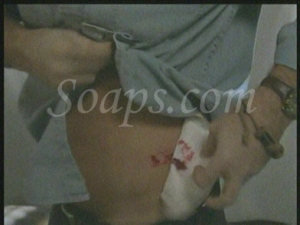 We got David back this week but were left with another whodunit storyline. Not something I wanted to see, considering Eddie Ford’s murderer is still on the loose, but this is Llanview. Let’s take a look…

Gunfire, two wounds and whodunit?
The obvious person who shot Todd would be Tomas. He too had a gunshot wound but was it really from one of John’s bullets or someone else’s? I don’t want to make the same mistake I did with Eli, thinking he was the perfect man, but I’m rooting for Tomas not to be a villain. The only good thing that came from Todd being shot is that word of the shooting prevented Jack from further torturing Shane. Unfortunately, Jack isn’t going to let his hatred of Shane go. I’m just afraid of what’s going to happen next and wish Shane would open up to his parents about what’s going on.

Nobody’s mistress.
Langston had enough this week and ended things with Ford. After all they’ve been through she couldn’t be his mistress. Her decision surprised me, though it shouldn’t have, considering her age and the fact that the show is writing the character out. I would like to think Langston would’ve decided to stand by Ford through this whole ordeal. She knows he’s not into Tess and that it’s only a matter of time before Jessica returns. To say this couple has had their ups and downs would be an understatement. I’ve actually enjoyed watching them grow together toward a future they clearly aren’t meant to have. How do you feel about what’s become of Ford and Langston’s relationship? Vote your thoughts through my Poll: Ford and Langston.

Charlie’s mistress.
You’d think Echo would find her own man and leave Viki’s alone after all of these years. Here’s another case of a character being destroyed due to the decision to let Brian Kerwin go. There’s been no word if Charlie will be recast, but at this point I hope they don’t go there. If I had my choice, I send Charlie and Echo off to St. Blaze’s to spend eternity wallowing in cheap liquor with Alex. What’s sad is now that Tess knows about the affair, she’ll probably use it to hurt Viki. Hell, we may have Niki Smith running around Llanview with Tess before we know it.

Taking a stand.
I get why John’s pissed off at Brody but am happy that Brody took a stand and told John to either let him have it or cool his jets. They have to work together at the LPD, and I think it’s important to face this issue head on in order for everyone involved to move forward. Should John be mad that Brody and Natalie lied to him? Yes, but he needs to take a step back and quit faulting them for their one-night stand.

Pa to the rescue.
If Bo put as much passion into what he has with Nora, like he did when attempting to scam Alex, maybe I would feel drawn to them as a couple. He's a little too old for me, but hot damn. I had no idea Bo's been hiding all that charm and sex appeal beneath his starched suit. I just wonder how far Bo would've gone to get Alex to spill the truth about David had Rex not saved the day. I love how Bo went the extra mile to find his son. Sometimes it's still hard to remember their relation, but it makes for good scenes. And David catching Dorian and Cutter… Things should be interesting next week.

Asa would be ashamed.
I have to give Nigel props for laying a guilt trip on Clint, which almost had me believing Clint had grown a conscience. Now if we could only get Nigel to figure out that Aubrey and Cutter are plotting to rob the family he's devoted himself to for years all would be right at the Buchanan Mansion.

The fight for Ryder.
Looking at the situation as a whole, I can find different reasons for why Ryder should be placed in the custody of Ford, as well as Viki. Ford is his father, but with Tess in the picture this could cause a safety issue for Ryder. I sure as hell don't think the baby should be placed in Clint's care, and if we're to look at the big picture, I'm not so sure he'd be safe with Viki either. Charlie having an affair with Echo just might put Viki over the edge, if she finds out. And let's face it, any one of Viki's alters are just as dangerous to Ryder as Tess. I guess Ryder's safest bet would be if Jessica came back and got the help she needed in order to raise her own child. This way Ford would be there to supervise and help if her mental state appeared to take two steps backwards.

Former One Life To Live's Roscoe...