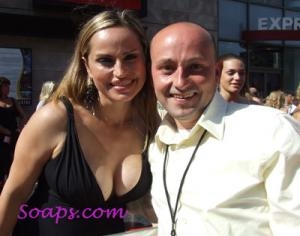 Although many characters come and go throughout the years, they always managed to leave their mark on the show – and leave fans wondering, “Where are they now?” One fan favorite many have recently asked about is Maggie Carpenter…

Remember Maggie? When she first came to town to visit cousin Andrew, Llanview’s local reverend, to deliver the news that she had just taken her oath to become a nun with plans to teach at a school for deaf children, never in a million years did she think she’d find the love of her life – Max Holden. Though Maggie found herself in a fair amount of drama, including taking a stand against terrorists with Patrick Thornhart and plotting with Max against Carlo Hesser, it made her realize she wasn’t cut out to be a nun! After finally giving in to her feelings for Max, the couple had the time of their lives, but when Max’s hunger for money destroyed Maggie’s dream of opening a school for the deaf, and practically killed her in the process, she put an end to their relationship and moved to Paris to pursue her dreams elsewhere.

So where has the beautiful Crystal Chappell been since leaving
One Life to Live in September of 1997?

Well, our Soaps.com reporter, Shannon Burrell, did catch up with Crystal on the red carpet at the 2007 Daytime Emmys – pictured above! However, since leaving the One Life to Live daytime scene in 1997, Crystal showed up in such primetime shows as “Silk Stalkings,” “Pensacola: Wings of Gold,” and “Poltergeist: The Legacy.” In 1999, Crystal landed another gig in daytime on CBS’s Guiding Light as Olivia Spencer, a role to which she still plays today – with a few more last names added to her name (Lewis and Spaulding)! Prior to her role on One Life to Live, Crystal appeared in Santa Barbara as Jane Kingsley in 1990 and also on NBC’s Days of Our Lives as Carly Manning during that same year.

We hope you’ve enjoyed our latest trip down memory lane as much as we have! If you’d like to take a peek at what Crystal’s character has been up to on Guiding Light throughout the years, please visit her Soaps.com profile on GL or better yet, view our exclusive interview with the actress today!