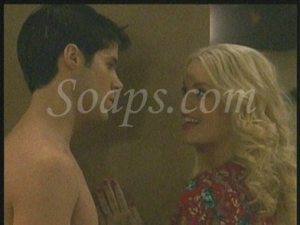 This week the plot thickened. Marty clearly held a secret, Tomas sought out help to remove Todd from Tea’s life and so much more. Here are a few things that stood out for me.

The hot one.
I was rolling when Tess introduced herself to James, who clearly wondered how he and Ford were going to handle such a creature. Her dialogue is to die for. She has names for everyone, even James who she’s deemed ‘the hot one’ in comparison to Ford. Considering so many women in Llanview used to fawn over Ford, it’s ironic that Tess takes a shot at Ford sucking in bed every chance she gets. She’s had a wealth of experience in the sex department, so the comments should be enough to bruise Ford’s ego just a tad.

Works for Marty. Not so much for John.
I’ve had a suspicion that Marty switched Liam’s DNA results from day one. After that cryptic statement about everything working out as she planned, even though John had to lose his son for it to happen, only verifies it. I’ll be surprised if this isn’t the case. I can see it now, crazy Marty enlisting Tess to help her get John’s baby. They both hate Natalie. Oh, the possibilities. Whether Tess helps Marty or not I won’t fault her for it. After all, she’s not real and gets a free pass from me to wreak havoc on those around her. Even if someone manages to have Tess committed to St. Ann’s down the road, she’s proven to be very resourceful behind those four walls.

The walls are closing in.
Speaking of walls, they appear to be closing in on Clint. More people are starting to suspect him of killing Eddie. I don’t think he did. Many fans think Matthew did. Though I’m hoping the killer turns out to be Nora, Clint told Matthew Nora was sleeping with Eddie. Matthew could’ve very well gone over there after Eddie informed him over the phone that his mama was too busy pleasing him to chat it up with her little boy. I just hope this storyline wraps up soon because it’s teetering over Llanview’s edge toward ‘Be.done.with.it.already.ville’.

Dorian the stick figure.
Considering the Warden assured Clint he’d hid any proof that David had been locked in his prison, you’d think he would’ve had the chalk stick figure labeled Dorian erased from the wall. I’m not sure if the Warden moved David to another location or if he’s off somewhere trying to get back to Dorian. I’m just glad Bo and Rex are working together. This little adventure should be enough to help get their relationship back on track. Now that Alex is coming back into the picture briefly, it makes one wonder if David has given up on Dorian and has other plans for those in Llanview. Even if Clint is in cahoots with Alex, she’s always had a soft spot for David so things should be interesting.

Verbal abuse, violence and sex.
Last week I talked about how Todd's reverting back to his old ways. Apparently Tea is too. I'm all for kissing and making up, but these two reminded me of who they were when Todd paid Tea to be his wife. Verbal abuse, violence and sex… Speaking of which, Tomas didn't hide the fact that he wanted Todd away from Tea. Do you think he was the one behind the gunfire? If I had to guess I'd say no. It could've been whoever has been at the end of the mysterious calls Tomas and Todd have been taking. Whether these callers are the same person, it's too soon to tell. I think this is going to be the beginning of a very big storyline twist. I hope we find out more about Tomas, why he left his family and if he has some sort of connection to Todd's past.

Second, maybe third, generation bully.
It upsets me to watch poor Shane consumed with fear of Jack Manning. I'm not sure how far the show plans to go with this bullying storyline but hope it doesn't take that dark road toward a possible suicide attempt. We all know this happens far too often in real life. I'd rather not have it in my soaps.

Breaking up is hard to do.
Dorian has no idea that David didn't want to leave her or about the hell he's been through. I know Dorian's vulnerable, but come on. To allow Cutter to kiss her was just ridiculous, especially since she's been fighting to prove what a conman he is. I hope if anything more comes from this it has Dorian with both eyes open. I'm so over the younger man cons the older rich woman storyline. What did you think of Cutter and Dorian's kiss? Vote in my Poll: Cutter Kisses Dorian to share your thoughts.

At the risking of Echoing a previous comment…
Charlie and Echo make me sick. I know Charlie agreed to break things off with her, at Dorian's persistence, but I don't believe for one second that he's going to hold up his end of the bargain. Since Brian Kerwin is leaving the show, it's only a matter of time before Viki finds out the truth.

One Life To Live's Sean Ringgold In...

Ashley Biden: 5 Things To Know About The New First Daughter

Silence Is Golden With Trump, but It’s Only a Matter of Time Before He Finds Another Megaphone