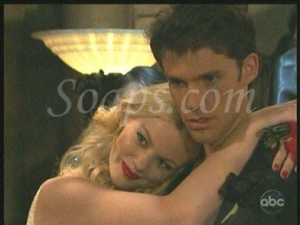 This week was all about losing or trying to preserve the mental state of many in Llanview. A quick dose of reality isn’t always the cure to ground these people, but let’s see what we have to work with…

Mr. and Mrs. Robert Ford.
It wouldn’t have been any fun if Brody and Langston had been able to stop the wedding before Tess executed her plan. I did feel a bit robbed that we didn’t get to see Tess fighting off Jessica during the beginning of the ceremony when the flashbacks of Jessica’s recent non-marriage to Brody emerged. One minute she yelled out, “Wait!” in the next episode, she and Ford were married. Once Brody barged in and bullied Tess and Ford around, I realized something. I could care less if Jessica ever returns or gets back together with Brody again. I think it’s because Jessica has always been written to have these great loves: Cris, Antonio, Nash and now Brody. I will always remember both Tess and Jessica’s love for Nash, and his for them. That was real, but enough with trying to replay history. Many people are lucky if they find one true love in a lifetime. Now that Natalie knows Tess is back, things should get really interesting. Tess tried to kill Natalie once, and I don’t doubt she’d attempt to do it again. I just hope Ford’s able to keep Ryder safe.

Jealous rage.
Joey lost his mind when he saw John and Kelly together. Though he threw plenty of insults, and one punch, John’s comebacks outshined them all. I’m officially over any chance of Kelly and Joey ever making things right and reuniting. Not interested, period. I’m actually liking bad boy John again. I’ve spent so much time hoping he and Natalie would get their happy ending, that I forgot how dangerous and sexy scorned John can be. It’s important for John to lick his wounds. Why not enjoy watching him do so for a little while?

Services included in the rent?
The Angels Square Hotel hasn’t been a normal hotel with full maid and towel service for a long time. Tenants normally rent by the month, so when Roxy barges into rooms unannounced it’s hilarious. We know she doesn’t clean and only carries around towels as an excuse to be nosey. Fun stuff.

How you doin'?
Loved, loved, loved seeing Wendy Williams as "Access Llanview's" Phyllis Rose. With all of the drama going on all of the time don't be surprised if we see a bit more of the character every now and again.

Pack your bags.
I love that Tea finally has a relative other than Dani in town. Tomas is clearly playing the big brother card and doesn't appear to feel threatened by Todd as many tend to be. However, I'm not buying that Tomas found Blair's photo at a flea market or that he's simply trying to get Tea away from Todd because he's a short-tempered heartbreaker. It still doesn't make sense why Tomas would leave his family, never to return, so I tend to believe he was mixed up in something and was trying to protect them somehow. Only time will tell.

I'll huff and I'll puff and I'll blow Viki's cabin down.
Todd was off his rocker again this week. I found it comical, which is no fault of James, that James thought Todd would be fine with him and Starr being together. James may not have known the true Todd when he and Starr reunited, but he sure as hell does now. I get it that Todd was abused as a child, but it doesn't explain why he becomes so enraged every time his daughters have a boyfriend. It's normal to be upset, even furious, to think of a boy laying his hands on one of them. However, to think Cole, now Nate, were really out to do bodily harm to Starr and Dani is just too much. Good thing Todd didn't arrive sooner to catch both his daughters in the arms of their guys. Whether it was a toy or not, Todd with a gun aimed at the kids can only regress Tea's mind back to the Todd of old. He's on the verge of losing everyone close to him. It's very sad that this well developed character is being written to revert backwards.

I have something to tell you.
It appears Marty's time at St. Ann's hasn't served its purpose by the way she ran into John's arms like a kid. Aside from Addie, I don't think the facility has ever done anything to help anyone other than to serve as a way to deter a sentence in Statesville. I have a feeling Marty will be released, or come up missing, in the near future. That's just how things roll in Llanview. It'd be too perfect for her to admit to John that she in fact changed Natalie's paternity results, therefore Liam is really his.

I put my family before yours.
Clint's had his hands in a lot of deceit these days, but I don't think it'd be fair to blame him for the tension between Rex and Bo. Rex could've gone to Bo for help and with details about David a long time ago. Bo would've been there to protect Rex and his family from Clint. Do you think Bo should've been more understanding as to why Rex stayed quiet about David? Vote in my Poll: Bo's Reaction to Rex to share your thoughts.

Those are my thoughts, what are yours? Do you side with Nora and think Clint killed Eddie? Or is Matthew right to defend Clint? Share your theories with me below.