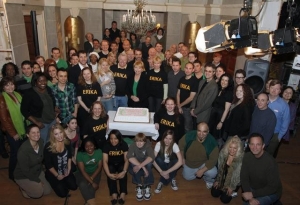 Thank you for forty years of Viki.

Sporting Erika shirts, today the cast and crew surprised Erika with a party at the ABC studios to celebrate her 40 years in Llanview. Take a look at the photo to see who all was there.

Look for the special episode, which will honor Erika, to air on Wednesday April 27.

On March 17 One Life to Live’s Erika Slezak will celebrate forty years playing the role of Viki. During a recent interview with TV Guide, Erika shared that the show plans to air a special episode surrounding her character. Though she hasn’t viewed the script yet, and an air date hasn’t been released, Erika said they plan to fill the episode with all that Viki’s going through and how she’s dealing with it. No flashbacks are planned at this time.

If you haven’t visited the link above, be sure to do so where you can view videos of each decade Erika’s been in Llanview, as well as details for how you can leave the actress a special celebratory message.

Have you always been a fan of Viki or was it one of her alters you preferred? Vote in Soaps.com’s poll to let us know.

Feel free to look through Erika Slezak's Profile to learn more about the actress. We invite you to join Soaps.com on Twitter @soapoperafan and "like" Soaps.com on Facebook to dish on One Life to Live, all the other soap operas, Glee, Grey’s Anatomy and Vampire Diaries.

One Life To Live Poll: Ford And...