Vegas baby!
Tess dragging Ford off to Vegas has been the highlight of my week. I'm loving Tess, who's so much better than watching Jess, and enjoyed the fight Ford was putting up. Tess' plan to marry Ford in exchange for her freedom is almost rock solid. Almost. While Tess thinks a marriage to Ford will prevent Jessica's family from having her committed to St. Ann's, what makes her think Ford won't? Tess has always been known to have her plans thought out perfectly, but the shine from all of those Vegas lights must have blinded her to that little detail. No matter what, I have a feeling Brody and Langston arrived a bit too late to stop the wedding.

Why didn't Brody just go to Jessica then about the affair?
Now there's calling the kettle black, Charlie. Why didn't Charlie just go to Viki with the truth about sleeping with Echo right there and then? Because Viki was dealing with enough already? Maybe. Because he's a coward? For damn sure! Again, I've washed my hands with this character, as well as Echo. Why would she leave a message implying that she and Charlie had been together on his cell, risking Viki hearing it? Some leopards never change their spots. I'm just glad that Dorian's spots are still intact. At least she's looking out for her new BFF.

Delgado siblings.
Given the twist that Tomas just so happens to be Tea's long lost brother, I'm wondering if he knows more about Todd than he's letting on. Were you surprised that Tea and Tomas are related? Share your thoughts through my Poll: Tea and Tomas as Siblings.

Taking refuge at the Lord cabin.
I think it's sweet that James bucked up and helped Dani and Nate hide from Todd. Starr's been in Dani's exact position before where her father's concerned, so it's nice to see her stand by her sister. However, has anyone wondered where Hope's been all this time? Unless Starr hired a nanny, I have no idea who's been watching the little one. It surely hasn't been Blair, Dorian, Kelly or Jack, given that they've been consumed with their own lives. I'm all for not overly inserting little kids in Daytime but would still like clarification of who their caregivers are. Hell, maybe Sam's taken over as the family sitter, since we don't see him either.

Those are my thoughts, what are yours? If you haven't seen the pre-noms that were released today check out the 38th Annual Daytime Emmy Awards Pre-Nominations. 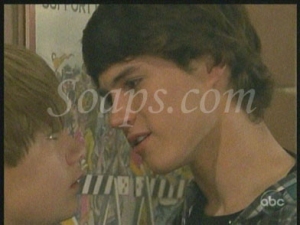 Credit: Did they or didn't they? (Soaps.com)

There were a few big reveals this week that highlighted the already chaotic goings on in Llanview. In the first, we not only found out who’s been bullying Shane but we got a look at the nuJack Manning. Let’s break it all down…

Like father like son.
It was no surprise, even before the spoiler was released, that Shane’s bully turned out to be none other than Jack Manning. While I will miss the feisty younger version of Jack, who was a sure clone of Todd, I’m looking forward to seeing where Jack goes from here. I think the show was smart to SORAS the character. It was definitely time, especially since Jack would be the best bully to put in the part during this public awareness type storyline. If you missed my interview with the nuJack be sure to visit Soaps.com Interviews The New Jack Manning, Andrew Trischitta to learn more about the actor.

Matthew ‘The Train Wreck’ Buchanan.
The character has become so unlikeable to me. I couldn’t believe he walked past Shane without even offering to help ward off Jack. Granted, the kid’s family is a total train wreck these days, but if Matthew doesn’t straighten up, I can see a drug storyline on the horizon for this Llanview teen. He’s tried to be a class act, a total jerk, even an adult at times, but Matthew as we knew him has gone out the door. I’m starting to wonder if there’s even a need for him in Llanview at all.

I don’t owe you anything.
At this point, John’s right. He doesn’t owe Natalie an explanation for sleeping with Kelly or anything else. However, as I predicted, John’s taking the ‘John way out’ and will need to face his troubles head-on sooner or later. Joey acted like a total sap. I can’t see how he can justify being upset. Natalie started this whole mess with her lies, and Joey has no right to be angry that Kelly slept with John. He is a newly married man after all. Then there’s Kelly. Did she really think a pie would make things right with Natalie?

I’ve been buggered. I mean, I’ve been burgled.
I loved Roxy rushing to find Brody to report, “I’ve been buggered. I mean, I’ve been burgled.” Good thing Roxy didn’t have the sense to dial 911, or head to the station first, before making the long trek to Llanfair, or Brody wouldn’t have realized Tess was back so soon after she’d hightailed it to Vegas to marry Ford. I still don’t get why Jessica, who wasn’t Tess until after she broke into Foxy Roxy’s, would use a crowbar to break into the salon in the first place, but whatever… it worked.

One Life To Live Video Promo: Ford Waits For His Bride