Soaps.com Catches Up With Farah Fath 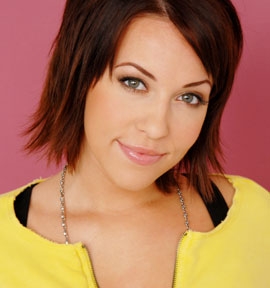 She was best known for playing Belle’s best friend Mimi Lockhart on Days of Our Lives for eight years, but a recent move to Llanview has brought Farah Fath a more mature and seemingly more complex character to play. As Gigi Morasco, Farah portrays a tough single mother who comes to town with a few secrets.

I recently caught up with Farah who shared her excitement over her new role and reflected on her time on Days of Our Lives.

Lori: Your portrayal of Gigi has been fun to watch. How have you been enjoying your new home at One Life to Live?

Farah: I’m pretty much just over the moon happy. I feel 100% rejuvenated and I’m more serious than ever about putting out good work. I get great material and don’t want to let down the people who hired me! Also, everyone has been so welcoming and I already feel like part of the gang.

Lori: Gigi seems to be more mature than your character on Days of Our Lives was. Was it important for you that she be totally different than Mimi?

Farah: In a sense, yes. I wasn’t really told much of anything about the character before my start day. In fact, the EP just said “…when you get your first script, you’ll figure it out…”. Which was fine because that’s pretty much how I operate anyway. I just jumped in without any real planning on how I was going to play the character. I really just let the writing do the talking (if that makes sense). There are really two things that make Gigi more mature than Mimi. I personally did a lot of growing on my time off and Gigi is a 27 or 28-year-old mom!

Lori: You are very believable as a mother, especially when your character was trying to protect Shane from Ramsey. Is it weird for you to be playing a mom, or is it just another day at work?

Farah: I’m not really sure how I feel about it (haha). I guess it’s a little bit of both. Maybe if the kid were somewhat younger I would find it more believable, but once again, I just have to kind of go for it. I’m doing the best I can with it, without having any real experience on the subject.

Lori: How do you like working with Austin Williams, who plays your son?

Farah: They certainly hired a professional! Soaps go SO fast and there are virtually no rehearsals so I was a bit worried for him seeing as how he’s only done film, but apparently he’s a certified genius and more times often than not, he’s correcting ME! So to answer this question, I’m lucky to be working with him. He’s kind of shy around me, but he loosens up with the guys, [like] John-Paul (Rex) & Michael Easton (John).

Lori: Is working on One Life to Live much different than what you experienced on Days of Our Lives?

Farah: MUCH different? No. Different? Yes...mostly with production. There are lots of small things the shows do differently, too many to name, but let's just say there are pros and cons to both franchises.

Lori: Have you watched Days of Our Lives since your departure? Any thoughts on the current storylines? And do you still keep in touch with any of the cast?

Farah: Since I left, I have maybe seen a total of 17 minutes of Days. I don't know what the current story lines are, however I can't imagine a lot has changed. I could probably watch one full episode and be caught up on everything. I keep in touch with mostly [former] cast members like Kyle Brandt, Jason Cook, and Kirsten Storms. I talk to Jay Johnson, Nadia Bjorlin, Martha Madison, and Alison Sweeney from time to time as well.

Lori: Your first scenes on One Life to Live were with Erika Slezak. Were you nervous to be working with such an iconic daytime figure?

Farah: Not really. I was just excited to start working and it was a really nice bonus that I got to start with her, but I never really ever got nervous. Anxious maybe.

Lori: What has it been like to work with her?

Farah: Erika is unbelievably normal and nice. She has a great aura about her that makes you feel instantly comfortable. The support I get from her is more than appreciated.

Lori: Your character is now becoming involved with Rex and Adriana. What can you tell us about your upcoming storyline?

Farah: Just that it gets realllllly good!

Lori: Since Gigi has been staying with John McBain, fans on our message boards are wondering if there might be a future pairing of the two. What are your thoughts on Gigi and John's relationship?

Farah: I think Gigi admires John and likes feeling protected by this man. He's been very caring of her and Shane and for that, she's so grateful. She finds him intriguing. I have no idea if they will ever be paired up, but I think you'll notice in the next couple months the writers test my chemistry with a few different male characters.

Lori: You were known on Days of Our Lives for constantly changing your hairstyle. Will we be seeing different shades of Gigi as well?

Farah: No unfortunately. Remember when I said there were pros and cons to both shows? One Life to Live is pretty set in their ways, they like for characters to look the same I guess. I'll push the envelope I'm sure. I'm a hair rebel. Although I highly doubt I'll ever be blonde on this show!

Lori: What do you like best about playing Gigi so far?

Farah: Everything. Because it's all still new and exciting. Every time I work with a new character a different facet of Gigi comes out. My character's gradual development is spot on as far as pace goes. I'm currently working on a new vulnerable side to her because so far I've been playing her very strong.

Lori: To take the role, you had to move to New York. How do you enjoy living there? Do you miss L.A. at all?

Farah: I love it here. I love that I can walk one block and eat at a fabulous restaurant and walk one more block to a little poppin' bar. Everything is at your fingertips in New York. I miss L.A., I guess. I'm not crying about it though, that's for sure.

Soaps.com would like to thank Farah for taking the time to talk with us and will definitely be watching to see what the future holds for both her and Gigi.