Who says dive bars aren't fun?
I don't get off on the misery of others, but if it brings us scenes like the ones with John and Kelly I'm all for it, in the moment. The hook-up between John and Kelly wasn't a big surprise, but since I love both characters, who are very similar, who better to have one? I'm just pissed we didn't get to see all of the hot, steamy sex they had. Now that Natalie's seen Kelly in a towel, I wonder if this will even the score and lead John and Natalie toward the road of redemption.

I'm a psycho magnet.
I understand Blair's need to be cautious in regards to Tomas and was a little surprised Cris didn't seem to clue in as to why she'd feel this way, being her new BFF and all. What do you think Blair should do? Please share your thoughts with me through my Poll: Blair and Tomas. I think these two have great chemistry but wait until Blair finds out who Tomas is related to. You'll find out as well next week!

Todd's bad timing.
Todd's daughters have got to be the most unlucky girls in the world. First he walked in on Starr and Cole right after their first time, and now on Dani and Nate planning to share theirs. Here we go again. I see history repeating itself.

Placing trust in the wrong hands?
Clint's in quite the bind, isn't he? Aubrey's now a Buchanan, and Vimal's on the verge of making sure Clint's legal battles are just beginning. I guess Clint has no choice, besides coming clean, than to trust Aubrey will help him if he stays quiet about her and Cutter. However, I'm still not impressed with how Clint's treating Rex and feel Clint's just begun to make Rex pay for being his son, which is a result of him cheating on Viki with Echo years ago. Talk about acting righteous! One thing I don't understand is Clint branding and faulting Rex for being a gold-digger, when he isn't anymore. Wouldn't he want to get to know the man Rex has become? After all, Clint's no innocent peach himself and should jump at the chance to try to make things right in his life, a life that's only promising a long stay in Statesville if he keeps up this attitude. 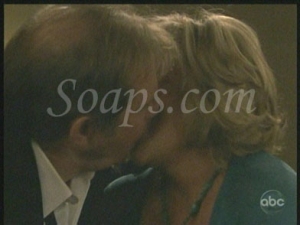 Just when we thought all of the lies were exposed, more were created. I’m not sure where the head writer is going with some of the actions surrounding a few characters this week, but let’s take a look…

My name is Charlie Banks and I’m an alcoholic… and a cheater!
Okay, here’s where I stop feeling sorry for Charlie. It was very sad for him to find out that Rex wasn’t his son. Should Charlie be devastated? Yes. Fall off the wagon? Sure, it would be understandable. Cheat on Viki? Oh, hell no! I’ve lost all respect for Charlie and officially want to welcome him to the loser’s club of Llanview. My slogan? “It’s only a matter of time before any good character joins.” Nevertheless, Charlie should feel guilty. In fact, I hope his guilt eats him up inside. If Viki finds out, she better not forgive him. There’s no excuse for cheating.

I’m not in the mirror. I’m in your head!
Now, here’s something I’m happy about! I’m not trying to minimize how upset Jessica is over the fact that Natalie slept with Brody and now has his baby, even though I still believe her baby is John’s. Anyone would be devastated. However, I’m so over Jessica accusing Natalie of always wanting her life. Maybe she wanted it years ago when she first arrived in Llanview, but over the years Natalie has created her own life and gained love and acceptance from everyone in her family. Enough already, Jessica. Really, at this point, who the hell would want Jessica’s life? The money would come in handy, the drama, not so much. Repetitious or not, I’ll take Tess’ return over whiny Jessica any day. I just wish Joey would’ve inherited another personality who could’ve stopped him from marrying Aubrey.

Pimp Daddy Ford.
I was a little stunned that Ford snuck into Llanfair to see his son but think the act will go a long way in saying that Ford’s really changed. He wants to be a father and take responsibility for his son. On a side note, were the bassinets labeled, so he knew for sure Ryder was the baby he was gushing over? Obviously, Ford’s need to be Ryder’s father is going to create major issues with Langston and Brody. Even though Tess plans to help Ford out, her motives are purely selfish. The only thing Tess cares about is remaining in control. Now that Langston thinks Ford’s gone back to his pimp daddy ways, this will be the beginning of the end for their newly developed relationship. It’s safe to say this is how the head writer plans to build up the character’s sendoff since the actress will last be seen on April 8. Yes fans, Langston’s last month in town will be filled with sadness and tough decisions.

One Life To Live Video Promo: Clint's Asked To Sign A Confession

One Life To Live Saturday Teaser Poll: Eloping In Vegas