A past full of secrets.
Do you get the feeling the show is setting us up for a possible Roger Howarth return? Between the reemerging photos of Todd's old face, the mystery surrounding Tomas and now the encore of Todd and Blair's first wedding, which will air in place of a new episode tomorrow, what are we to think? I'm not opposed to Roger returning to his Llanview roots but definitely don't want him back as Todd. It was hard enough accepting the recast, and Trevor St. John did what a lot of actors can't do. He made the role his own. "OLTLfan25Yrs" stated, "I've watched OLTL before Todd was even a character on the show. I loved RH, but TSJ is now Todd to me. I've sat through a few repetitive storylines lately but if Roger comes back as Todd I'm gone as a loyal viewer. I like seeing him in flashbacks in pictures and if RH comes back as a sibling of 'Todd's' that would be fine, but not as Todd." The other side of the coin? "lmluna02" said, "Roger Howarth is Todd. He would bring so much back to the show. It would be priceless. TSJ has done a great job but they could never make him be 'Todd' the way that RH plays him, and RH and Blair's chemistry is and always was off the charts!" Personally, I wouldn't be able to accept that the Todd of today has been scamming us all these years. Too many lives would be destroyed, especially his childrens'. However, Roger as an imposter who returns to look like the Todd of old, that would make for a great storyline.

New beginnings and the end.
While I enjoyed the emotional scene at Statesville between Langston and Starr, I wish the show could've brought Brandon Buddy back for this one episode. I felt, through Starr, the emotion that must have went on between her and Cole during their goodbye but seeing Cole would've gone a long way for fans who are still having trouble dealing with the end of this once much loved couple. Given that Starr thinks James has moved on with Michelle, which we know he hasn't, I'm sure we'll have to wait a bit longer for him and Starr to start their new beginning. However, with beginnings always come endings, and now that we know Ford's the father of Jessica's baby, this is sure to bring one for Ford and Langston, especially since the actress has filmed her last scenes and will depart Llanview on April 8. 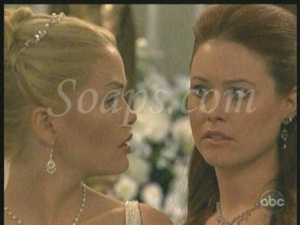 Credit: Is Tomas part of Todd's past? (Soaps.com)

Again, we only got to view four new episodes in Llanview, but the good news is ABC has halted any further repeats from taking place! This week was filled with reveals, deception and pure devastation, which leaves me with these thoughts on all of the secrets that were finally exposed…

Secret reveal number one: Charlie is not Rex’s father.
In this whole mess, and even more so than Rex, I felt so sorry for Charlie. He’s lost so much, has been dealing with his alcoholism and now this. Rex has always been strong and will bounce back, as will Shane, who has always had a close relationship with Charlie prior to thinking he was his grandfather. Clint, on the other hand, should be ashamed of himself. After everything he’s done, I couldn’t believe he didn’t try to save face in front of his family and continued to bash Rex publically.

Secret reveal number two: Brody is not the father of Jessica’s baby.
Can anyone say, “Where are my alters when I need them?” This news is going to put Jessica over the edge. In fact, we’re headed for another Tess return, which was revealed in the new Video Promo: Llanview February Sweeps. I’m a big Tess fan, probably because she’s who Jessica was when she first met and fell in love with Nash. Ever since Jessica lost her memories at the hands of Mitch, she’s become an unlikeable character in my book. I can’t wait to see Tess return to deal with the latest issues in Jessica’s drama of a life. Are you excited about Tess’ return? Vote in my Poll: Jessica’s Sanity to let me know.

Secret reveal number three: Natalie and Brody’s one-night stand.
John and Jessica were rightfully stunned when they found out about Natalie and Brody’s one night stand. Oh, how I wish Brody and Natalie would’ve come clean when this first happened. Neither Jessica nor John could’ve faulted them for it. They might have understandably been upset but would’ve had no grounds to call it cheating.

Secret reveal number four: John’s not the father of Natalie’s baby.
John broke my heart when he realized he’d fallen in love with a child who isn’t his, if we’re to believe what the DNA test says. I still think John’s Liam’s father. Putting everything that Vimal did aside, I think Marty went in and did a switch of her own to make it appear that Natalie’s baby was Brody’s.

One Life To Live Video Promo: Natalie And Brody Confess

One Life To Live Saturday Teaser Poll: Caught In Bed