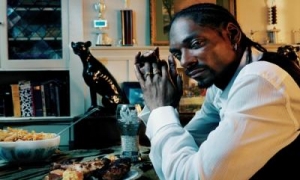 Well, Snoop wasn’t kidding when he said he wanted to write a new hip-hop oriented theme song for the show! Although we don’t see the show changing their current song anytime soon, you can now get a sneak peek of the fun version Snoop did for One Life to Live here! Enjoy!

An ABC Rep has now confirmed to Soaps.com that Snoop Dogg will perform on the show on May 8 and May 9, 2008! Look for the rap superstar to show up at Rex’s club, Ultra Violet, to perform two hit songs, “Sensual Seduction” and “Life of Da Party,” from his new album, “Ego Trippin’!” Look for him to mix in a bit of the show’s theme song as well!

Anyone who’s a fan of award winning rap artist Snoop Dogg knows he’s a huge fan of
One Life to Live! However, up until word got out that his good friend Mary J. Blige would be reappearing on the show on February 15th and 18th, 2008, we didn’t know just how much!

In fact, Snoop actually contacted One Life to Live’s Supervising Music Director Paul Glass with an offer to write a brand new hip theme song for the show! “I’m a huge fan of Snoop’s and I’d love to hear what he’d come up with,” Paul Glass stated.

Okay, so this isn’t the strangest thing we’ve heard, but, still, fans are wondering, “What does this really mean?”

Though we tried to get the ‘full details’ on what we would call ‘a really cool, different, exciting twist for a daytime theme song’, an ABC Rep would only confirm to Soaps.com that what Paul Glass said [above quote] was true.

You bet we’ll keep you posted as this story develops! One Life to Live has had some awesome guest music appearances including Lifehouse, Tito Puente Jr., Simply Red, Chris Botti, Erykah Badu and most recently, Nelly Furtado, Timbaland, Keri Hilson and One Republic! Why not add Snoop Dogg to the roster? You know he’d not only rock Llanview, he’d “Drop It Like It’s Hot!”