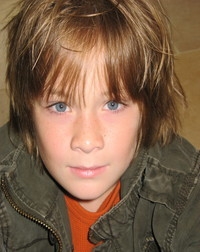 There’s been a lot of talk on our
One Life to Live message board about newcomer Austin Williams (Shane Morasco). Recently, we had a chance to chat with Austin, and we are very excited to give the fans a glimpse into the life of such a young actor, one who you’ll see is wise beyond his years!

Amy: At what age did you start pursuing a career in acting and how did the interest in the field come about?

Austin: “I did a few commercials when I was 8. Later that year I booked my first movie “The Good Shepherd,” as a young Matt Damon. I got interested in acting because my mom did commercials when she was my age and after seeing them, I wanted to be on TV, too.”

Amy: Once you received your big break how did the rehearsing affect your everyday schedule? How did you manage with school and such?

Austin: “My first lead role was as Henry Clayton in the movie Michael Clayton, when I was 9. We didn’t rehearse, because Tony Gilroy (the director) wanted the scenes to be fresh. So we went right to filming. I did a lot of filming on the weekends and during February break, so I didn’t miss too much school. When I did miss, my teacher gave me the work, and I made it up. Now on OLTL, I get my schoolwork done on set and I learn my lines at night for the next day.”

Amy: How is working in daytime different than in film?

Austin: “Working in daytime is different from film for many reasons. The biggest change is in the pacing of the filming. On OLTL, it feels like almost filming a movie a day, because there are like 100 pages of script every day. Another difference is how both are filmed. In movies, there is usually only one camera but in daytime TV, there are many cameras all going at once. Lastly, with movies, you get the script pretty far in advance, but in daytime, there are lots of lines to learn without much time to learn them.”

Amy: Is there anyone in particular from One Life to Live who took you under their wing?

Austin: “Erika Slezak has given me a lot of really good tips. She’s really nice. Everyone has been really nice.”

Amy: I have to ask… Did it feel funny to be scolded for cursing by your onscreen mom, Gigi (Farah Fath), during the scene where Shane was trying to protect her from Lee Ramsey (Hunt Block)? Did your mom get a chuckle out of it?

Austin: “It didn’t really feel funny when Farah scolded me because she is such a good actress, it felt like it was my real mom getting mad at me for cursing. My mom thinks it’s funny when Gigi scolds Shane. She thinks that Gigi is totally believable as a mom.”

Amy: You’ve been labeled by fans as being one of the cutest kids in daytime. How do fans react when they see you on the street?

Austin: “I have never been recognized by anyone on the street, except when I was working on the street with George Clooney and everyone wanted to take pictures and get his autograph. It was crazy!”

Amy: Do you have any new projects in the works?

Austin: “I play a bully to Elle Fanning in “Phoebe in Wonderland,” which just premiered at Sundance, and will probably be released sometime in 2008. I also have a pretty dramatic part in an episode of Law & Order this season, which is supposed to air in March.”

Amy: If you could work with any actor who would it be and why?

Austin: “There are so many actors and directors who I would like to work with, I can’t just name one. I hope to get the chance to work with a lot of them during my lifetime.”

Amy: What do you like to do for fun?

Austin: “For fun, I like to hang out with my friends, skateboard, play sports, cards and videogames.”

Soaps.com wants to thank Austin for taking the time out of his busy schedule to talk with us today. It was refreshing, and impressive, to hear about all of his accomplishments thus far in his young career. We wish you the best, Austin, and much success in all that your future holds!

Michael Easton NOT Crossing Over To...