One Life To Live Album: The Sound Of A Kiss On iTunes. (UPDATED!)

Find out what else the actors are doing outside of Llanview by taking a look through our One Life to Live News Room. We invite you to join Soaps.com on Twitter @soapoperafan and "like" Soaps.com on Facebook to dish on One Life to Live, all the other soap operas, Glee, Grey’s Anatomy and Vampire Diaries! 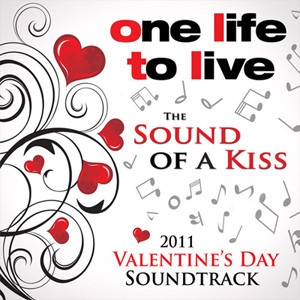 ABC has just released the soundtrack for this special iTunes purchase. For $5.99 you’ll get seven songs, which include “Hard To Give” by Kristen Alderson (Starr), “Everything I Ever Learned” by Kelley Missal (Dani), “Isn’t It Funny” by Brittany Underwood (Langston), “Lost For Words” by David Gregory/Brittany Underwood (Ford/Langston), “Just To Be,” “Dream of Our Own,” and “Dream of Our Own (Piano version)” by Kassie DePaiva.

“With the release of ‘The Sound of a Kiss,’ we continue to explore opportunities to incorporate music into ‘One Life to Live’ which has always been very important to us,” said Frank Valentini, executive producer. “The audience has a passionate investment in our characters and this CD affords the opportunity to create a deeper connection between the fans and the show.”

“It’s been great getting everyone back into the recording studio for this project,” said Paul Glass, supervising music director. “There are a couple of tracks that the fans have been asking for and that we have been wanting to get out there: the song Kelley Missal sang at Todd and Tea’s wedding and Kassie DePaiva’s song from New Year’s Eve. We have some great new tracks from Kristen Alderson, David Gregory and Brittany Underwood, as well as the song that Kassie sings on the show this Valentine’s Day. I really feel like this album has something for every fan!”

On Tuesday February 8 One Life to Live actors Brittany Underwood (Langston Wilde) and David Gregory (Robert Ford), as well as a few fellow unnamed co-stars, will release a new iTunes exclusive album titled “The Sound of a Kiss.”

Though not many details have been released as to what fans can expect, it’s already said to be the perfect Valentine’s Day gift for the one you love. Will you check out the new tunes? Tell Soaps.com through our poll…

One Life To Live Saturday Teaser Poll: A Trip To Statesville

One Life To Live Behind The Scenes: The Sound Of A Kiss Video Promo