"Thanks, Dad." "Dumb move, Aubrey."
Aubrey is no slouch in the blackmailing department, and I found her way of forcing Clint to give Joey back his inheritance comical at best. However, she's playing with the big boys of Llanview now. She may have her resources but the Buchanans, and I'm talking about Joey as well, are going to eat her alive once the truth comes out. I find it hard to believe that Cutter could doctor that yearbook photo so quickly without anyone the wiser. Then again, I've never tried to tamper with a yearbook photo before. Aside from all the blackmailing, and the Vimal and Rama drama, the highlight for me this week was when Joey finally realized that Kelly still loves him. Finally! I'm upset that we were robbed of knowing if Joey was going to throw Aubrey to the curb to rekindle his love for Kelly then and there, before he found her kissing Cutter. Even though they admitted their feelings, but claimed their timing was off, I still think these two have a lot of unfinished business. [Sigh] I want to like these two as a couple but am getting bored beyond belief at all of this back and forth banter. I hope next week brings some closure to everyone involved in these lies, so we can move forward. However, I'm a little worried that since Cutter is so good at forging things, he'll manage to somehow tweak the footage Clint has on him and Aubrey to their benefit.

Ready to move on.
At least Starr is ready to admit she doesn't have a future with Cole and wants to pursue one with James. Again, I'm okay with the slow pace of James and Starr coming together. I like the tension filled scenes but just hope they don't go on forever. I don't fault James for kicking things up a few notches with Michelle. After all, he's trying to move on as well, and Starr can't fault him for that. He's given her ample opportunity to prevent him from doing so.

Unemployment in Llanview.
In this economy it's hard for many to land a job, but I'm sure Ford will have an easier time of it than most Americans. I personally think Ford should team up with Joel and start a stripper-o-gram business with Roxy. How about those scenes this week? Strippers aside, where would you like to see Ford work? Vote in my Poll: A Job For Ford to let me know. On a side note, Ford is going to need a job for more reasons than one… If you want to be spoiled as to why, check out my One Life to Live Spoilers. Beware, it's a whopper!

Well, hello stranger.
Tomas has made his way to Llanview, and I'm eagerly awaiting the secrets he brings with him. I wonder if that heated phone call Todd took outside of Rodi's is somehow connected to this mystery man's arrival? Stay tuned! 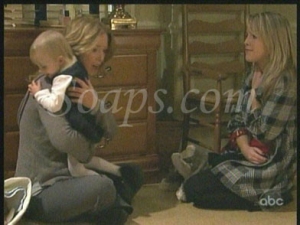 Wow, what a week in Llanview we had! With all of the lies still floating around town, each day’s episode felt as though it were a cliffhanger Friday. Let’s take a look…

Why doesn’t that sound right?
Maybe because you’re finally getting your bearings back, Marty! Out of all this time having to deal with Marty and her craziness, I have to say I enjoyed Monday’s scene with Starr and Hope. I liked how Marty started to remember and slowly regained her sanity, if you can call it that. However, the writers should have played on that more and allowed Marty to recover without taking two steps back by rushing off to John with her ramblings about Natalie and Brody. Mind your business, twit, enough is enough already. Marty has been a core character on the show over the years and this would’ve been a good opportunity for the writers to redeem her somehow. It’s safe to say that Marty has now planted a seed of doubt in John’s mind, one that he’s sure to reflect on as the truth begins to unfold next week.

Knowing what it’s like to be bullied.
If someone knows how it feels to be bullied, it’s Echo. While I don’t feel sorry for what Clint’s done to her, I do think a little more should have been done on Echo’s part when it came to finding out her grandson was being bullied. At the very least she should’ve talked to Gigi and Rex privately so they could approach the subject in a way that wouldn’t make Shane any more alienated than he already feels. If we’re to make this storyline a public service announcement, as it should be considering the huge nationwide issue this has become amongst kids, then executing it properly would go a long way.

One Life To Live Saturday Teaser Poll: A Trip To Statesville