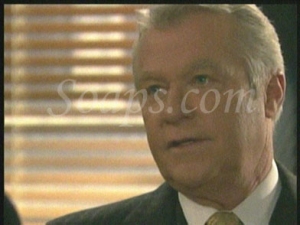 The most unpredictable relative! (Soaps.com)

Not only is there a possibility that Brody may be the father of you both, your mothers wanted to give you the same name, Asa, after your late Grandpa Asa Buchanan. I guess it could’ve been worse. They could’ve wanted to name you Clint. Your first lesson in life should be to know that none of this is your fault. This is just how the chips fall in Llanview. On top of the drama that has surrounded you since before birth, here are my thoughts on the rest of the goings on around you…

Nice try little brother!
After months of wanting to pay Grandpa Clint back, Inez might’ve gotten a confession out of him had she not continuously fumbled with the police wire in her shirt. Your grandfather is ruthless, but definitely no fool, so when he leaned over and talked into Inez’s shirt to have a little chat with your Uncle Bo, via the wire, I couldn’t help but laugh. However, Aunt Nora confronting Grandpa Clint really put forth an impact. Her words made his guilt rise from the depths of his pores. It’s interactions like these that give us hope that those who have gone down the beaten path will one day possibly be able to be a good example for the both of you. However, be weary of newcomers coming into your family’s fold, such as Aubrey Wentworth, your soon-to-be aunt. She’s no good. Uncle Joey is better off beating feet back to London with Uncle Kevin, which is also where your parents will most likely send you to boarding school in order to be SORASed…

Get out of jail free and eat some cake!
How did Aunt Tea have a cake ordered, baked and professionally frosted for Nate in the course of an hour from the time her and cousin Dani picked him up for court? I guess flan isn’t the only specialty of Carlotta’s. You’ll meet her soon enough when your parents bring you to the diner to show you off.

I can't make you smile.
Uncle Todd telling Cousin Starr that since he can't make her smile anymore, with bribes of new reptiles, which he may present both of you with for your first birthdays, made me sad. However, suggesting James could reignite the spark in her eyes had to be the sweetest thing he's said in a longtime. Again, I love your Uncle Todd best when he's being a good father. You're going to hear many bad stories about Uncle Todd in the coming years but give him a chance and he'll spoil you rotten. Either that or use you for one of his future scams… but you didn't hear that from me. On another note, I have a feeling Uncle Todd knows more about the portrait of Blair than he's letting on. For those wondering the same thing, vote in my Poll: Todd's Involvement to let me know your thoughts.

Can you say MyFace is a big bad no-no?
Hopefully by the time you're able to access the internet they'll have stricter policies to prevent you from creating MyFace profiles. Dorian told Uncle Rex that Grandpa Clint could be his father. Not many people know this, but it's true, which makes Shane your cousin. Learn from Shane's example… There are bullies in the world. Cousin Shane received some nasty MyFace threats this week. I don't want to point fingers but have a feeling that Cousin Jack could be behind the threats. Try to stay away from this networking tool that many in Llanview use to take jabs at one another. However, if you do join MyFace, by no means allow Grandpa Clint to get a hold of your username and password… He'll only end up posting fake statuses for you, like he did with David Vickers, in order to get what he wants, which may be to prevent a few little fillies from trying to snag the newest Buchanan offspring.

Goodnight Moon.
I hope during all of the excitement your parents have taken the time to read you the popular bedtime story by Margaret Wise Brown. If they haven't, well, I've given you a bedtime story to sum up Llanview this week but hope you don't have nightmares from it. Now off to dreamland you go… I hope you're both shielded when the world as your parents know it begins to fall apart. The threat has been coming for weeks now, but again, none of this is your fault. Let's just hope that bad lady I mentioned, Aubrey, doesn't destroy your christening by exposing your Grandpa Clint and the fact that one of you has a different father... In fact, if this happens, I'm afraid Jessica won't be able to handle the truth and may have to introduce Tess as your new mother/aunt.

Do you have any advice for the little ones when it comes to living and surviving in Llanview? Soaps.com's on Twitter @soapoperafan and Facebook. Come join us!

One Life To Live: Spring Into Fun...