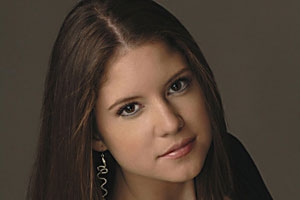 Another Daytime actress out.

Apparently the show has extended Brittany’s stay by a few days. The actress is now set to leave Llanview on Tuesday April 12.

According to TV Guide Brittany will last air on Friday April 8. It’s said the character will leave Llanview after Langston’s offered a movie deal, presumably based off of one of her scripts.

One Life to Live actress Brittany Underwood, who created and has played the role of Langston Wilde since July 14, 2006, has just been let go from the show. Soap Opera Digest is reporting that her release will happen this spring and is storyline dedicated.

What does this mean for her very close Llanview relationships? Stay tuned, as Soaps.com will keep our readers updated as this story develops.

If you haven't heard what's been going on over in Port Charles, check out Rebecca Herbst Fired From General Hospital. We invite you to join Soaps.com on Twitter @soapoperafan and "like" Soaps.com on Facebook to dish on One Life to Live, all the other soap operas, Glee, Grey’s Anatomy and Vampire Diaries!

E!'s Kourtney Kardashian Cast On One...