One Life to Live’s Patricia Elliott In Vita & Virginia! 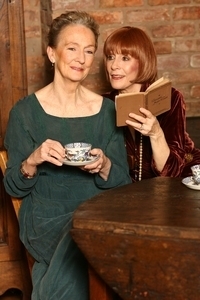 Starting on February 11, 2008, directed by Pamela Berlin, Patricia will take the stage and co-star with another award-winning actress, Kathleen Chalfant, in this No Frills Production, adapted by Eileen Atkins’ account of the communications between Virginia Woolf and Viva Sackville-West! For twelve Monday nights, fans will be able to start their hectic weeks out with a little rest and relaxation while watching these two women light up the stage of the Zipper Factory Theater.

When we asked Patricia about her latest venture, she told Soaps.com…

“This wonderful play – Vita & Virginia – uses all of me: voice, body, and all of my classical theater background. I feel like a race horse who’s been given another run at the Kentucky Derby. And I’m playing opposite Kathleen Chalfant, one of the finest actresses in theater today. To say I’m thrilled, is to underestimate.”

The No Frills Production Company prides itself on still offering plays to include talented and veteran, over forty, actresses, giving the younger aspiring talents the chance to work with and learn some valuable lessons from their elders!

So mark your calendars with these dates and times!

Where: The Zipper Factory Theater at 336 West 37th Street in NYC, New York

Ticket Information: The $35.00 tickets can be purchased by phone at 1-212-352-3101 or online at The Zipper Factory.com. With the box-office opening two hours prior to the show, fans can also make dinner reservations by calling the Zipper Factory Tavern at 1-212-695-4600.

Soaps.com wants to congratulate Patricia on her new play! We just know your fans will love seeing you live as much as they anticipate your daily appearances as Renee on their favorite daytime drama!