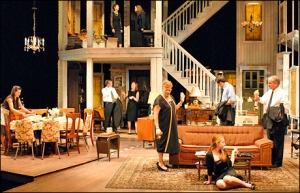 One Life to Live and Broadway fans alike are in for a real treat! Newcomer to the show, but not to acting, Brian Kerwin (Charlie Banks) will appear in the new play “August: Osage County” as Steve Heidebrecht!

Written by Tracy Letts, this new arrival on Broadway is promised to be filled with comical dialogue topped off with a without fear or favor approach as a western family’s patriarch disappears, which will lead them back to their home enveloped in the countryside of Oklahoma searching for answers.

Prior to the play’s current Broadway showcases, its cast performed to sold-out crowds at the Steppenwolf Theatre Company in Chicago. Don’t miss your chance to see Brian shine on stage in the three-hour and twenty-minute run of “August: Osage County” at the Imperial Theatre on 249 West 45th Street (Between Broadway and 8th Avenue) in New York, NY 10036 on…

Soaps.com wants to congratulate Brian on his latest Broadway venture! Not to worry fans, you’ll still be able to catch Brian as Charlie on One Life to Live. He has no plans of leaving Llanview just yet!

To learn more about Brian and his character, please visit his profile page under our OLTL Cast List!