One Life To Live’s Trevor St. John’s In The Family. (Updated.) 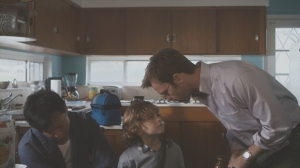 Trevor will play Cody Hines in the story that surrounds his son Chip (Sebastian Brodziak), who has only known life with having two dads, Cody and Joey (Patrick Wang). After Trevor’s character dies in a car accident, Chip and Joey are stunned to find out that Cody named his sister as Chip’s guardian.

The film will begin screening first on Friday November 4 at the Quad Cinema at 34 West 13th Street in New York City, New York. Call 1-777-FILM #636 for more details. Then again on Monday October 24 at the Mission Valley UltraStar Cinemas for the San Diego Asian Film Festival.

Gina Tognoni (ex-Kelly) will also appear in the film as Nurse Jackson.

Not only does One Life to Live actor Trevor St. John (Todd Manning) have a big upcoming Llanview storyline in 2011, he recently finished filming his latest movie “In The Family.” Directed by Patrick Wang, Trevor’s role is said to be a juicy one!

Though there are no further details at this time, Soaps.com will keep our readers posted on its premise and release date when it’s announced.

To find out what's ahead for everything Llanview in this new year visit our One Life to Live Spoilers. We invite you to join Soaps.com on Twitter @soapoperafan and "like" Soaps.com on Facebook to dish on One Life to Live, all the other soap operas, Glee, Grey’s Anatomy and Vampire Diaries!