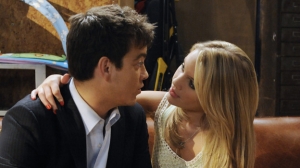 It’s hard to believe 2010 is nearing an end in Llanview. It seems like just yesterday that Jessica lost her memory, her sister Natalie hooked up with her boyfriend, and Marty was pregnant with John’s baby. A lot has gone down, and not all of it good. Here’s a rundown of my favorite and cringe-worthy OLTL moments of the year, as well as what I would like to see in 2011.

Starr-Crossed Lovers.
Surprisingly, I really loved the musical number. I don’t always love musicals, but the way this one was scripted made it work. A lot of the characters tied together nicely and we got to hear some amazing vocal talents for a nice and brief change. Also, anytime you can work Pat Benatar into a show is awesome. Starr’s version of “We Belong” was one of my favorite songs of the musical.

All’s well that ends well…or not.
The “Starr-Crossed Lovers” had a not so happy ending, as Cole was sent away to prison for murdering Eli. Starr and Cole are on my best and worst list for the year. This couple was written so up and down this year and it made it difficult to root for them. However, their good-bye was written so well that it reminded us of why we have followed this couple. Unfortunately, it was too little, too late. With Cole off in prison, I’m hoping that Starr is less of a victim in 2011.

A rose by any other name.
Sierra Rose was the catalyst for a major winter story. Stacy’s manipulations to have Rex’s child weaved a web that tangled up several major players. What I did not see coming was how the very unpopular Stacy would exit the show. Shortly after giving birth to her baby girl, Sierra Rose, a delirious Stacy drowned a grizzly death after falling into an icy pond. She left behind icy footprints, indicating a possible return. It was an amazing exit. I wish the same could have been said for Oliver and Kyle, who seemingly vanished into thin air.

You can go back to your childhood.
Jessica lost her memory…again, and reverted to being a teenager. Nothing about Jessica’s memory loss worked for me. While Bree Williamson can do no wrong for me in her acting, I wish she was given a better story to work with. Thankfully, her memory loss did not drag on all year long. Unfortunately, the paternity of her baby and Natalie’s baby did.

Who’s your daddy?.
Both Natalie and Jessica found out they were pregnant at the same time and neither knew who the father was. I felt like this story was a bit contrived, too. Twins, pregnant at the same time, with the same possible father? I’m happy that Brody turned out to be the father of Jessica’s baby. I feel bad for John, though. He really wants to be a father and I think he would be a great one. In 2011, it will be interesting to see what Natalie does and what the fallout is for all those involved. Secrets can only stay buried for so long, and it’s only a matter of time before Brody and Natalie’s one night stand finally comes out.

We’ll never be friends.
There is definitely no love lost between Marty and Natalie, who both fought for John’s heart in 2010. Marty knows the truth, but remarkably kept it a secret. It’s been a tough 2010 for poor Marty and she’s turned into a loose cannon. While she’s been super crazy, I’ve actually been entertained watching Marty unravel and go after Natalie. I have a feeling that 2011 will be more of the same for these two rivals.

They say I’m crazy, I’ve got your crazy.
Eli started off as a nice romantic interest for Blair and then turned out to be the culprit for all the crimes in Llanview. I think it was too easy to make Eli the fallout guy and there was a lot about his story that still doesn’t make sense to me, especially Greg’s back story and blackmail. Thankfully, Eli’s time in Llanview ended in 2010. I hope Blair will actually get a normal romantic interest in the New Year.

Family Ties.
Todd, Tea and Dani’s story was one of my favorite in 2010. Todd and Tea click as a couple and watching him and Dani develop a real father and daughter relationship was a Llanview highlight. I had hoped Tea wasn’t really dead, and thankfully, her death was just one of Eli’s sick games. One of the sweetest moments of the year was when Todd saw Tea alive for the first time.

I’ve been a bad, bad boy.
I have to say, I’m digging the new Clint, or should I say reincarnation of Asa? Clint is kicking butt and taking names. It’s kind of fun to watch him being so bad. One of my favorite scenes of the year was after his men beat up Ford and he treated himself to one of Ford’s beers. Clint is just so calm in his calculations. I have a feeling that his latest despicable plot to destroy Bo and Nora is one of many to come. I’m looking forward to David’s return in 2011 and if he’ll have anything to say about Clint having him thrown into prison.

You say good-bye, I say hello.
Thankfully, Stacy, Hannah and Eddie all exited Llanview this year. I cringed each time these characters were on the screen, especially in Eddie’s scenes where he tortured Nora. I wish they would have taken Inez with them. Nothing about her character is working for me. Perhaps in 2011, she’ll be given more interesting layers. On a positive note, I was thrilled to see Kelly, Echo and Aubrey enter Llanview. As a former devoted Guiding Light and As the World Turns gal, it has been a joy to see some of my favorite actresses turn up on One Life to Live. I only wish Kelly was given a stronger story for her return. Maybe 2011 holds a good story for her.

These moments were just the tip of the iceberg, as there were so many to choose from. I hope you’ve enjoyed recapping the year in review with me. With the way stories are unfolded in 2010, 2011 looks to be another exciting year in Llanview! Soaps.com looks forward to recapping the show with you in the New Year. What were some of your favorite OLTL moments? Feel free to share your comments below.

One Life to Live Casts Shenaz...