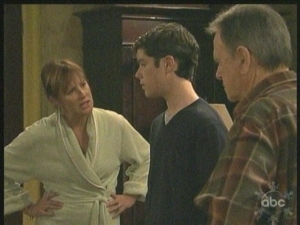 I know, it was another short week in Llanview, but Tis the Season! It’s a good thing that there’s still plenty to reflect on before we ring in 2011. Let’s have at it…

Dad cheated on you with his assistant!
Wow, don’t hold back, Matthew! I get it that Matthew’s upset but he shouldn’t have called Bo out in front of Nora. Sure, give Bo the old, “If you don’t tell her I will,” but to go about it the way he did wasn’t cool. What was even worse, Nora immediately started making excuses for Bo and claimed Matthew needed a paddling for his attitude. It took Bo admitting the truth for her to even think that it could possibly be true. Nora is clearly devastated, and though we know Bo didn’t really sleep with Inez, I can’t blame Nora for kicking Bo to the curb. Too bad he doesn’t know what we know!

Threats, threats and more threats…
Inez needs to buck up and tell Bo the truth. I don’t care how much she wants to protect her sons or how many times Clint threatens her. Enough is enough and this storyline is getting old really fast. By now she should know Clint will stop at nothing to get what he wants.

If I talked to my parents like that I’d get slapped.
And slapped you got, Darren! Wow, Destiny has really gone over the edge. I tend to agree with Darren… I know Destiny is going through a lot right now, but if she’s to be angry with anyone it should be Greg. Sure, her grandparents lied to her all of these years but they did it out of love. Destiny doesn’t need to rush back home and is right to stay with Shaun and keep a little distance. But I think it’s time to start healing some of these wounds between her and Mr. and Mrs. Evans.

Let's go to our happy place…
How funny were the Lamaze scenes?! It was no surprise that John was preoccupied with work. Therefore when taking part in a relaxation exercise he pretty much told Natalie to picture a 6 x 9 cell, which led to Natalie feeling trapped and thinking about Brody being her baby's father. How I wish this paternity issue wasn't, well, an issue. I love seeing John taking the initiative and wanting to tie the knot before the baby arrives. Too bad Marty is still running around like a chicken with her head cut off. With John and Natalie so close to being pronounced husband and wife, do you want Marty to blurt Natalie's secret out or would you rather she and John lived happily ever after with the truth untold? Let me know through my Poll: Natalie And John's Wedding.

New year, new love?
I am glad the writers aren't having Cris and Layla stay faithful to their long distance relationship, seeing as the actress isn't returning any time soon. Though Cris doesn't have any proof just yet that Layla has gone astray with her boss, it's clear that's where things are heading. I'd love to see someone new arrive on the scene for Cris to have a hot love affair with. After witnessing the steamy New Year's Eve kiss with Blair, this is when Cris is the most exciting - when he's living on the edge.

Jailhouse rock.
It was nice that the younger crowd band together and decided to stop by the Llanview holding center to wish Nate a Happy New Year. Let's just hope, for Nate's sake, 2011 brings some answers as to who really killed Eddie Ford. Unless you still think Nate did? I think not.

New beginnings.
Loved the kiss between Starr and James as the clock stuck midnight. It's looking as though these two are going to explore their feelings, and I hope they fall into a decent storyline while doing so. Langston is still holding Ford to their six months of celibacy but I don't think it'll last that long. After all that they have been through, surrounding Eddie's murder, really, why wait?

Well, hello, Cutter!
Finally, we met the man at the other end of Aubrey's mysterious calls. We still don't know whether Aubrey's trying to scam Joey out of the Buchanan millions, like Clint's afraid of, or if she has a more sinister plan in mind. However, I'm happy about one thing… having a new hottie thrown into the mix! Aubrey clearly has a past she wants to keep from Joey. Even though she managed to snag away the magazine containing her photo from Kelly, it's only a matter of time before someone blows her out of the water. I'd like to see Cutter hook up, and slip up, with Kelly for the truth to come out.

I hope you all have some great plans to ring in the New Year! Join Soaps.com on Twitter @soapoperafan and Facebook for all soap opera, Glee, Grey’s Anatomy and Vampire Diaries scoops.

I'll see you back here in 2011 for another week's worth of Amy's "One Life In A Week." It's been my pleasure bringing you everything surrounding Llanview and I look forward to doing so in the new year to come!

One Life To Live: Carmen LoPorto Out...

One Life to Live Casts Shenaz...