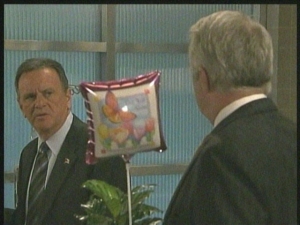 Santa, is that you? (Soaps.com)

It was only a three day week in Llanview, as it will be next week too, but there were definitely some worthy scenes to discuss. Let’s take a look…

Why were you at the scene of your father’s murder?
I’m still not buying that Nate killed Eddie. We all know he was there, standing over Eddie’s lifeless body. However, I think Nate suspected one of his brothers, or even his mother, killed Eddie then took the murder weapon back to his apartment as a way to protect them. James didn’t do it. I don’t think Ford did it. Inez could’ve done it. But my bets are still on Nora being the real killer. Maybe Ford and Nate happened to see Inez at the crime scene after Nora killed Eddie? Could it be that’s why they are acting so guilty? Maybe that’s how the gun got back to Inez’s. She saw Eddie dead, thought one of her sons killed him then took the gun. Not a spoiler, just me playing “Diagnosis Murder.”

Don’t you ever tell Nora.
Speaking of Nora… What a gem Clint was to give his brother some touching advice about keeping Bo and Inez’s sex romp from Nora. Not! It’s all part of Clint’s master plan to destroy his brother and the woman who left him for Bo. When did Bo get so gullible to think that Clint really gave a damn about him or his marriage to Nora?

Please believe in me.
I can understand Todd thinking Marty somehow framed him, but for him to think she killed Eddie Ford was a bit much. Sure, Todd’s made it so Marty can’t get anywhere near Hope, but Marty’s been too preoccupied with her revenge against Natalie to even think about Todd or Hope for that matter. I liked how Todd, with Tea’s persuasion, didn’t try to hide the fact that he was a suspect in Eddie’s murder to Dani. He did what normal people do and asked her to believe in his innocence, which she did. Great stuff!

What do you want me to do? Throw you an engagement party?
Natalie begged Marty not to tell John that her baby isn’t his. At this point, Natalie’s become very desperate. Marty may have agreed not to tell John, but if Natalie’s smart she would have picked up on those keywords: Won’t. Tell. John. If only Natalie realized that Marty plans to take her secret to another source. After all, there are others in Llanview who would love to know about it: Brody and Jessica to name a few. In the end, I don’t see the paternity of Natalie’s baby being a secret much longer, and I definitely don’t see John and Natalie tying the knot before it’s exposed.

We're both drunks.
You and Echo are both acting like drunken idiots, that's for sure, Charlie! Viki has officially gone from one of the strongest Daytime characters I know to one of the weakest. Charlie is pushing this woman to the breaking point and if I were Viki, I'd throw him and Echo out on their asses. Enough is enough! Since when is it okay to have the mother of your grown non-child living with you and your wife, especially with the bad blood still thick between Echo and Viki? Don't even get me started…

Down through the chimney with good Saint Nick!
Ha! For once I don't mind Dorian's interference in Viki's life one bit! Someone needed to put a snag in Echo's plan to stay close to Chuckles and what better way to ring in the holidays than to have Echo come barreling down Dorian's chimney in a Santa suit? Too bad Echo didn't have a little spiked eggnog before her adventure. It would've cushioned the fall. Classic Dorian, classic soap opera. Loved it!

Tis the season.
Some were happy, some were sad, and one character aged while preparing for the holidays... NuSam, now being played by Patrick Gibbons Jr. I was glad to hear Starr confess to James that she needs him in her life. I truly think she does. Not necessarily in a romantic way, though I wouldn't mind it, but with Cole in jail she's feeling more alone than ever. I only hope 2011 brings some closure to many in Llanview, considering all of the drama surrounding everyone lately. Who would you like to see have an extra special Christmas? Please vote in my Poll: Who Deserves The Best Christmas to let me know.

Here's wishing you and yours a very Happy and Safe Holiday! Have you ever wondered what the actors do for the holidays? Some of the Llanview ones, among others, spilled their plans to Soaps.com, which you can read about through our Soap Opera Star 2010 Christmas Interviews. Join Soaps.com on Twitter @soapoperafan and Facebook for all soap opera, Glee, Grey’s Anatomy and Vampire Diaries scoops.

In light of New Year's next week, I'll be posting my blog again on Wednesday. I'll see you then for another partial week's worth of Amy's "One Life In A Week."