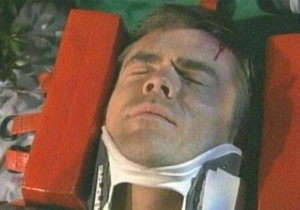 Get off your knee and run, John! (Soaps.com)

Murder, suspects and enough whodunit scenarios to make our heads explode. This has been one of those weeks where a few random storylines that didn’t quite seem to fit were mixed into the big Eddie Ford fiasco. Let’s dissect them all…

Crash of emotions.
I can understand Matthew being consumed with fury after seeing Bo with Inez, but I can’t believe he didn’t stop to make sure those in the other car were okay or at the very least put in an anonymous call for help. Note to all teens out there, and some adults, do not try to use your cell phone while driving! His irresponsible actions forced Rex and Nora off the road, which sent Rex to the hospital and Nora to who knows where. View the photo and wake up, America! Okay, enough of my public service announcement.

Forced to leave Llanview whether he wanted to or not.
Eddie refused to leave Llanview quietly and pushed a few too many buttons since his sudden arrival. Unfortunately, he was never able to collect what was promised to him from Clint and got a bullet to the chest instead. So many people had motive to kill him: Nate, James, Ford, Inez, Todd, even Clint… I don’t buy for one minute that James, Ford or Nate killed Eddie. It’s too obvious. I think James threatened Eddie and then Nate came upon Eddie’s body after he was shot. But not by James. Inez? Sure, she could have killed Eddie with Bo’s gun, the one she couldn’t keep her eyes off of during Tuesday’s episode. Todd? Nah, even though John found his cuff-link in Eddie’s room, I think Todd would have paid someone to off him. Hell, Eddie could’ve found Todd’s cuff-link after their encounter and pocketed it. However, where did Nora disappear to after the crash? If I had to pick who I’d like to see as the murderer, I’d say Nora. Her and Rex hadn’t been driving long before they crashed. And remember, Eddie had been killed a few hours after that. Nora could’ve walked back to the motel, found Eddie’s gun that James left behind and killed the SOB before he could get his hands on her again. This storyline could go so many ways. I’m hooked!

On a side note, are any of you torn that Eddie is gone? I know he was downright cruel, obnoxious and abusive, but do you wish the writers had taken his character another way? Maybe have had him come to Llanview to try to win over his sons? I think there was so much more to tell about this character before he went off the wall so fast. I hate how the writers bring on these great actors then turn them into psychos in order to kill them off, just like they did with Eli! Anyway, vote in my Poll: Eddie Ford’s Image to let me know your thoughts on this as well.

No sex mess.
Okay, so Inez lied to Bo. Go figure. However, after the second she heard about Eddie’s murder, she should have come clean with Bo. I don’t care if Clint threatened to turn her son in as a suspect because all three of them had motive to kill Eddie with good reason, and could probably get off on self-defense whether it was or not! Bo’s the Commissioner. He could help if she explained the whole sordid tale of blackmail to him, which could’ve been prevented from the get go had Inez turned to Bo in the first place like she’s done since coming to town. In this writer’s eyes, there’s no excuse for what Inez has done. Unless Inez did murder Eddie, or thinks one of her sons did, and is trying to scramble for a way out of this mess too?

Jolie letdown.
What a huge letdown the Jolie proposal scene was. How many years have we been waiting for John to say I love you to Natalie? To propose? Yet the second John asked her to marry him, Natalie rushed off to call Rex to ask what she should do and ranted and raved about Marty and her explosive blackmail. I'm fed up with this storyline and totally wish the writers would find someone completely new, exciting and secret-free for John to be paired up with. Enough is enough. I've officially given up on this couple, one who I dare say has been a favorite of mine since their inception, and only wish to one day be wooed back into another love story involving John. Natalie, at this point, I could care less what she does or if her baby really is Brody's.

Just say it, already!
There is one person in town who I want to biff on the back of the head and force the words to come out of her mouth… Kelly is starting to take a page from Marty's book. If you have something to say, just say it! I'm getting fed up with this 'should I tell him' crap and am losing interest fast in Kelly's quest to reclaim Joey as her one true love. The only thing I'm looking forward to is Cutter's arrival and how he'll play into the mix. At this point, nothing's for sure but I can promise he'll be nice to look at.

You open it. No, you open it!
I don't want to spoil what's inside Eli's box, but its contents could surprisingly lead to something good for Blair. Stay tuned!

Those were my thoughts, what were yours? Feel free to share them in the comment section! Join Soaps.com on Twitter @soapoperafan and Facebook for all soap opera, Glee, Grey’s Anatomy and Vampire Diaries scoops.

In light of the holiday next week, I'll be posting my blog on Wednesday. I'll see you then for another week's worth of Amy's "One Life In A Week."