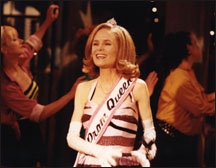 It’s been almost five years since
“One Life to Live” fans and Llanview residents last saw psychopath Allison Perkins after having a hand in putting Ben Davidson (Mark Derwin), the love of Viki’s (Erika Slezak) life in an irreversible coma. Well, hold on to your hats fans, she’s coming back!

Although we don’t have any of the storyline details, Soaps.com has learned that Allison’s portrayer, Barbara Garrick, will return to the Llanview scene starting January 25, 2008!

No stranger to Daytime, before leaving “One Life to Live” back on January 31, 2003, Barbara appeared on “Guiding Light” as Charlotte Wheaton in 1985 and on “As the World Turns” as Rita Renfield from 1998 to 1999. These days, Barbara has kept quite busy with numerous appearances on Primetime shows and films alike!

As soon as we receive more details surrounding this exciting return, we’ll be sure to post on our One Life to Live Spoilers.

In the meantime, we want to welcome back Barbara to the show! We can’t wait to see what Allison has in store for Llanview in 2008!