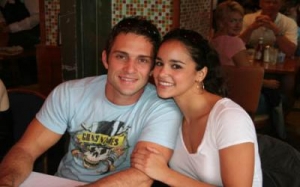 As we reported back on January 17, 2007,
One Life to Live actors David Fumero (Cristian Vega) and Melissa Gallo (Adriana Cramer) were engaged over the 2006 Christmas holiday! Now, a year later, the couple celebrated their wedding nuptials!

Although the couple is staying ‘hushed’ in regards to the event, we know the wedding took place on Sunday, December 9, 2007 in New Jersey. Surrounded by family, friends and their Llanview castmates, the couple was announced as Mr. and Mrs. David Fumero. Should we receive more details from the happy couple, we’ll be sure to give you a little glimpse into their joyous day!

Melissa Fumero, who will now take on David’s name, will be exiting her role after her contract is up sometime toward the end of January. However, David has commented that he doesn’t have any plans of going anywhere!

Soaps.com wants to congratulate David and Melissa! We’re sending you a lifetime full of happiness!

One Life To Live's Allison Perkins...