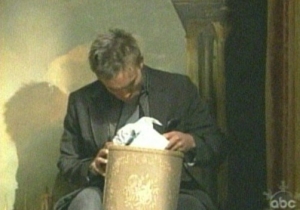 Joel and his pole! (Soaps.com)

Glad to see some went back to work this week in Llanview, others delivered news, wrong impressions and of course that loose cannon Eddie Ford tried to put the fear of God into his son and Nora. Join me while I touch base on a few things that stood out in my mind. Ready, set, go…

Getting back into the game.
I love that Rex is finally getting back to work and putting his private investigative skills to good use now that he’s not chasing his long lost parents all over Llanview and New Mexico. I was a bit surprised that it took Natalie this long to confide her dilemma in Rex. After all, Gigi’s known about it basically from the get go and Rex has always been a confidant of Natalie’s. She’s going to need all of the support she can get because I have a feeling that Marty’s conscience will soon go by the wayside and she’ll be back to plotting the next move against her rival, especially after that bitch slap Natalie gave her!

I spy someone kissing!
I’m happy that Dorian told Viki that she saw Charlie and Echo kissing. For once, Dorian had no ulterior motives, she wasn’t out to hurt Viki and really appears to be sincere with their newfound friendship. Or shall I say, understanding. We all know the niceties won’t last but I always enjoy these little spurts of civility that Viki and Dorian have shared throughout the years. Charlie had some nerve begging Viki not to throw Echo out after admitting to have kissed the mother of his non-son. Frankly, the more Charlie carries on like this, defending Echo at every turn, the more I think Viki is too damn good for him! Hell, it’s not as though Rex is a child who needs his parents to be together. Get a clue, Charlie…

Wrong impressions.
It’s clear Aubrey is really working the ‘I’m a respectable and worthy girl’ angle by initially not accepting Joey’s proposal in front of Viki and Clint. And how appropriate was it that she and Ford once had a fling? Nice believable touch! I would love to believe that the person on the other end of her mysterious calls is David, who could be trying to get back at Clint somehow. However, I have a feeling she’s been chatting it up with Cutter, who’s set to arrive in town very soon. I felt bad for Kelly who thought the ring Joey held was for her. But come on… is she really going to pull off the claim that she and Kevin are reuniting? If her having to convince Kevin to go along with her on this one will keep him onscreen a bit longer, I’m all for it. I will miss Kelly and Aubrey as new BFFs though. They had the makings for a great friendship.

Can you hold my pole?
Joel the naked model was back this week. This time there were no balls involved for props but rather a pool stick, or as Joel referred to as simply his pole. I love the humor interjected in these art room scenes and wonder how the actor who plays Joel could keep a straight face when asking the sexually deprived Langston, "Can you hold my pole?" Good stuff!

"Bully Beatdown" at Rourke's Gym.
The old gym set got some action this week. I just wish my favorite MMA fighter Jason 'Mayhem' Miller would've shown up with a professional bully for a Llanview "Bully Beatdown" on Eddie. I get it that James has been abused the most. However, I'd like to see the writers make him stronger, a bit more like Ford, and not have him submit to Eddie's backlash so easily. I think we're going to see James snap one of these days. And when he does, Eddie better watch out, especially now that James has Eddie's gun. On a side note, all that testosterone during the sparing was hot, hot, hot!

Misinterpretations of a text.
Stealing and using Nora's cell phone was about the smartest tool Clint and Eddie could've used to execute their plan. Even though Nora's texts didn't sound like her, Bo had no reason to believe they weren't from his wife. Speaking of Nora, it was pretty brave of her to initially stand tall to Eddie. Though not the brightest thing to do. Speaking of doing something so off the wall… Inez went through with Clint's plan and drugged Bo. I still think she should've confided in Bo rather than saddle up with Clint. Once this is all over, I can't see anyone forgiving Inez for her actions and I hardly think her sons will shed any sympathy her way either. Do you fault Inez for agreeing to help Clint? Please vote your thoughts in my Inez and Clint Poll to let me know.

We all know how Clint likes to forge things.
Here we go again. Clint was backed into a corner by his protégé when Matthew called him out as being Rex's father. Clint tried to manipulate Matthew into thinking that Bo was having an affair with Inez - and Nora was having one with someone else too. I don't think for one second that Matthew believed his father would betray Nora like that. However, after hearing a man answer Nora's cell, and seeing Bo cozied up with Inez, the details of Clint's latest scheme may have been a bit more believable to the young Buchanan in training.

Those were my thoughts, what were yours? Feel free to share them in the comment section! Join Soaps.com on Twitter @soapoperafan and Facebook for all soap opera, Glee, Grey’s Anatomy and Vampire Diaries scoops.

One Life To Live's Terrell Tilford...