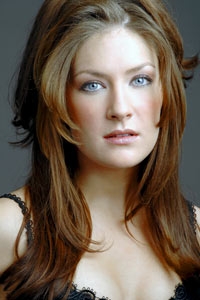 Although One Life to Live actress BethAnn Bonner landed her current contract role as Talia Sahid on December 21, 2006 after being a finalist in Season Three of
I Wanna Be A Soap Star, many fans aren’t aware of the actress’s singing background!

On the hunt for her dream, BethAnn received her degree at the Emerson Performing Arts College in Boston then headed out to California in search of the ‘promise land’ of acting. Singing since the age of two, and performing since the age of five, BethAnn stood alongside her father (a retired Air Force Band director) in many military concerts. However, at the age of fourteen, BethAnn had an inspirational CD released titled “Born of Love!”

This collection of inspiring songs was written by Doug and Peggy Bargh and delivered through BethAnn’s voice in a non-rock approach. A list of its tracks include:

2. The Day the Lord has Made

9. Shadow of the Cross

Soaps.com was happy to find out this little extra treat about the woman who’s brought feistiness to the Llanview PD! To learn more about BethAnn and her career, please visit her website at
BethAnn Bonner.com!

Amy Sends You Some Holiday Cheer!