E!’s Kourtney Kardashian Cast On One Life To Live. (UPDATED!) 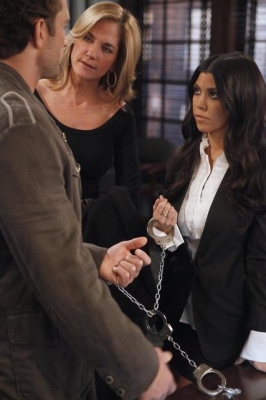 If you don’t want to wait until Monday to see Kourtney in Llanview, tune in tonight to E! News at 7.00 PM and 11.00 PM for a sneak peek of her upcoming role. Then on Sunday March 27, during “Kourtney and Kim Take NY,” fans will get to watch the behind the scenes filming of her walk-on role.

Kourtney has just announced that she will appear in Llanview on Monday March 28.

TMZ is reporting that Kourtney will take on the Llanview role of a new lawyer who will not only have a borderline love/hate relationship with one of the current regulars, she’ll supposedly be kissing and punching this man too! Should Cris Vega (David Fumero) be on high alert? Stay tuned!

E! has just released details that their reality star Kourtney Kardashian will be making her first acting appearance through a guest starring role on One Life to Live! Though details of who Kourtney will be playing are under-wraps, we can assure viewers that she will not be playing herself.

Look for Kourtney to appear in scenes with David Fumero (Cris Vega) and Kassie DePaiva (Blair Cramer), which will air in March 2011. She’ll be hitting the ABC studios today to shoot the scenes and told E!, “I grew up watching One Life to Live. I hear I get into some trouble and I am looking forward to it. This may be my acting debut, but the Kardashians know a thing or two about drama.”

For those who watch Keeping Up With the Kardashians, look for these scenes, and what it took to film them, to appear in the spinoff “Kourtney and Kim Take New York,” which will debut in January 2011.

Soaps.com can't wait for Kourtney's appearance! How about you? Share your thoughts through our poll below. We invite you to join Soaps.com on Twitter @soapoperafan and "like" Soaps.com on Facebook to dish on One Life to Live, all the other soap operas, Glee, Grey’s Anatomy and Vampire Diaries!

One Life To Live's Brittany...