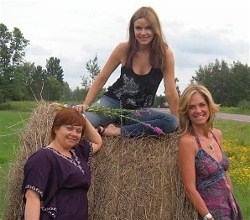 Never too early to plan!

Bree Williamson tweeted in regards to this weekend’s fan event, “Good news and bad. Good-our film “Rumbleseat” is going to be featured at the Hollyshorts film festival. Bad-it’s this weekend. So since I can’t be in two places at once…I won’t be able to attend this weekend’s fan club festivities. I am so sorry guys.”

Also, word is in that the previous event location change is changing again – back to its original setting at the Marriott. Take note of the official release pertaining to the change below…

“The event that had caused us to move from the Newark Liberty Airport Marriott to the Renaissance for our “One Life To Live” Events has been canceled, so we’re moving back to the Marriott! This will make it easier for all of you, and for us, and so this is indeed good news! For anyone who booked a room at the Renaissance, whether it’s an initial booking or you changed hotels, please email me your information at Debbyoconnor@aol.com and I will pass it along to the event coordinator and they will ensure that you get a room at the low event rate so that there is no inconvenience to you there.”

Due to space issues, Trevor St. John’s event and the concert with Tom Degnan and Billy Magnussen on Friday, as well as Ted King’s events and the Ladies of Llanview on Saturday, have been moved to the Renaissance Newark Airport Hotel at 1000 Spring Street in Elizabeth, New Jersey, which is less than a mile from the Newark Marriott. There will be a complimentary shuttle provided by the hotels to run between the Marriott and the Renaissance, so you can get to the events you need to without any problem or cost to you.

Andrew Trischitta (Jack) and Saoirse Scott (ex-Jamie Vega) will be on hand Friday August 12 for the “Reserved For Rondee” performance. See event details below… They will also be at the Main Cast Luncheon on August 13.

This year’s fan club weekend will bring the Divas of Daytime TV to the Triad at 158 West 72nd Street in New York City, New York. Come out and see “All My Children’s” Bobbie Eakes (Krystal) and “One Life To Live’s” Kassie DePaiva (Blair) and Kathy Brier (ex-Marcie) on Sunday August 14 at 7.00 PM. If purchased in advance, tickets run $55 in Orchestra, with a two drink minimum, and $45 in the Mezzanine, with a two drink minimum. If purchased the night of the concert, expect to pay an extra $10 on top of the previous listed prices.

On Friday August 12 join “One Life To Live’s” Tom Degnan (Joey) and former “As The World Turns” actor Billy Magnussen (ex-Casey) as their band “Reserved For Rondee” plays from 7.00 PM to 10.00 PM. The concert event will take place at the Marriott Newark Liberty International Airport at 1 Hotel Road in Newark, New Jersey. Your $85 ticket will include the show, hors d’oeuvres and a cash bar will be available. As an added bonus, some of the actors’ castmates will be on hand to show their support.

For ticket information please visit Your Number One Fan.

There’s been another event added to the fan club weekend. On Sunday August 14 fans can have lunch with Kristen Alderson (Starr) from 12.00 PM to 2.30 PM at the Newark Liberty International Airport Marriott. Your $65 ticket includes lunch, non-alcoholic drinks, an 8 X 10 photo of Kristen, a meet and greet, and lots of surprises. Please visit Kristen Alderson to save your seat today.

Gina Tognoni (Kelly) and Shenaz Treasurywala (Rama) will be in attendance for the “Girls Night Out” event.

The One Life to Live Main Cast Luncheon will also take place on Saturday August 13 from 9.30 AM to 4.00 PM (or until the last actor leaves). There will be autograph and photo opportunities, lunch, raffles and silent auctions. This event will take place at The Marriott Hotel at the Newark Airport in Newark, New Jersey. Tickets will run $120 for fan club members and $130 for non-members. Since this event has been planned separate from the ones below, please contact Debbie Morris at oltlfanclub@gmail.com with questions as to who will be attending and to order your ticket today or visit the Order Form directly.

All of this year's events wrapped into one will take place on August 12 and 13 at the Marriott Newark Liberty International Airport at 1 Hotel Road in Newark, New Jersey.

Though plans are still being made, Soaps.com hears there will be a special event set for later that night as well. Details to come…

On Saturday August 13, from 4.00 PM to 7.00 PM Ted King (Tomas) will meet with fans to chat about his Llanview character and so much more. Tickets for fan club members are $65, non-members $70, which includes a buffet lunch.

Saturday August 13, from 6.00 PM to 9.00 PM, maybe even later, brings fans the "Girls Night Out with The Ladies of Llanview" event. Over a buffet dinner, Melissa Archer (Natalie), Bree Williamson (Jessica/Tess), Florencia Lozano (Tea) and Ilene Kristen (Roxy) will share what's going on with them in and out of Llanview. Remember, while you're partying with the girls, you never know who else will show up!

For more details and ticket information please visit Your Number One Fan.

Next year's One Life to Live Fan Club Weekend will take place on Friday August 12 and Saturday August 13, 2011.

Soaps.com will bring our readers more details, such as ticket information, scheduled events and which Llanview actors will be in attendance, as soon as they are released. Do you plan to attend next year? Please tell us through our poll below.

In the meantime, find out what this Llaview actor is doing outside of Daytime through Brian Kerwin In The Help. We invite you to join Soaps.com on Twitter @soapoperafan and "like" Soaps.com on Facebook to dish on One Life to Live, all the other soap operas, Glee, Grey’s Anatomy and Vampire Diaries!

Former One Life to Live's Kathy...