One Life to Live’s Curse Of Margaret Cochran! (UPDATED!) 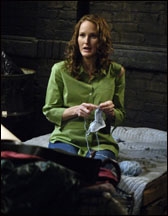 As previously reported below, we said there was no chance of Margaret Cochran (Tari Signor) returning to disrupt Todd’s life again – because she’s dead, right? Well, think again! Word has it she’ll be making a ghostly appearance starting on January 17, 2008! Without giving too much away, you can bet that Todd will be affected by this – if not directly, through someone he loves!

Although Todd Manning (Trevor St. John) is on a quest to find his newfound son Tommy, if his rapist, and mother to his son, Margaret Cochran (Tari Signor), were still alive, things could be a lot worse…

However, as every One Life to Live fan knows, there’s no chance or threat that Margaret will come back to haunt Todd once again – or have a chance to brainwash their son into thinking Todd is the monster most in Llanview depict him to be…

Because Margaret Cochran is dead!

On the other hand, her portrayer, Tari Signor, is still very much alive! Tari took over the role from Rebecca Mader in June of 2004 and spent a calm year popping on and off canvas appearing as the meek Buchanan Enterprises accountant. It wasn’t until 2005 when she landed a contract role with the show, which resulted in a year’s worth of major drama – having crowned her one character that gave Todd Manning a run for his money!

Since being killed off the show in June of 2006, Tari has appeared in the primetime hit “Law and Order” as Dr. Erica Rubin. However, prior to and during her time with the show, she was recognized from shows including “Third Watch,” “Law and Order: Criminal Intent,” “A Deadly Vision,” and in the film “Rudy Blue” as Eve Crane.

Though there has been no word of the show bringing Margaret back from the dead, as so many soaps tend to incorporate in their storylines these days, wouldn’t it put an exciting twist into what has become a drawn out race against time if Margaret stopped Marcie McBain (Kathy Brier) in her tracks and claimed little Tommy as her own? Yeah, it’s pretty farfetched, but in the land of the soaps, it would make for one heck of a twist!

Soaps.com wants to send our best wishes to Tari along with our thanks for making Margaret a character whose legacy ‘lives on’ in Llanview to this day – an unforgotten presence who has laid the ground work for one of the show’s most recognized storylines of 2007!

One Life to Live’s Losses Of...