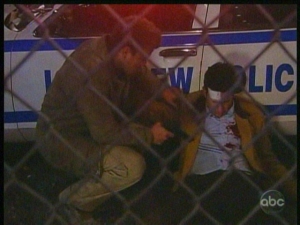 Todd gets his miracle! (Soaps.com)

Even through all of the devastation that rocked Llanview this week, including the fact that the network aired a repeat on Wednesday, Todd received a miracle in one of Daytime’s current back from the dead storylines. Others weren’t as lucky, so let’s take a look back at my thoughts on these scenes…

Again, Cole disappoints.
Well, Eli went out with a bang. And I’m not talking about the explosion. As always, Cole went off half-cocked and basically gave up on Starr and Hope by killing Eli. For this alone, I can’t find it in me to feel sorry for him. There was no proof that they died in the warehouse explosion. Did Cole stop to think that by killing Eli he could face life in prison, away from his girlfriend and daughter? Hell no. While I know this is how the writers plan to write the actor out of Llanview, it saddens me that I’ve lost all respect for a character I used to really enjoy. Another character I’ve grown to dislike even more than I already had, Marty, came to her son’s rescue. What bothered me most was how she executed her cover story, not so much to Natalie but to Brody. She might as well have shrugged her shoulders and giggled right along with her, “Yep, I shot him, arrest me,” reply. Now with Natalie having evidence against Cole and Marty being suspicious of Natalie and Brody… We’re in for an annoying storyline all of its own. Anyways… would you have covered for your son? Let me know through my One Life To Live Poll: Marty’s Mother Instincts.

Start digging!
Hannah is one heck of a kidnapper, no? Last week I let Starr off the hook for not trying to knock the gun out of Hannah’s hand. This week, I’m not letting her or James off so easily. Why did Starr not tackle Hannah while James was eying the gun on the ground? I think these two had a few occasions where they could’ve turned the tables on Hannah. With that being said, Starr and James continue to bring emotion to an all new high with every scene. The show really hit their mark when casting for the character of James. I think even those who are still Sole fans might eventually accept a possible StarrJam after Cole is out of the picture. Their chemistry alone says it all.

Don’t even think about it, Manning!
How comical was the scene where Todd was slowly leaning down to give John mouth to mouth? From Todd’s comments about not letting anyone ever know he was attempting to save John, to John’s eyes snapping open before their lips touched and warning Todd not to even think about it! I didn’t think it was possible to add comedy into such a drama-filled storyline. Props writers! All I could picture was John as Sleeping Beauty and Todd as the prince who would wake him from a lifetime of ZZZs!

It's a miracle. Are you ready for another one?
I think the biggest news this week was when word spread that Tea was alive. The way Todd's face lit up when he caught sight of her was enough to remind me that Blair was never Todd's soulmate, Tea is. Blair and Todd are like Port Charles' Luke and Laura. They have been for years. However, after this storyline, I'll never look at them that way again. It takes some damn good writing to pull something like this off in the eyes of those who feel like I do. I've never been happier with the show as I've been the past few months.

Why do you always have to take from me to prove that you can?
I think I felt sorrier for Shaun than I did for Destiny. What she's going through is traumatic in its own right, but I'm just not a fan of this paternity storyline. We all know Greg's going to be out of the picture soon and in the end, Destiny will presumably continue to be raised by her grandparents. Boring! I want to see Shaun lash out. I want him to stop being this nice guy, one who everyone always seems to walk all over, and get involved in something exciting for once.

One step ahead.
Not only did Clint get away with having Ford beaten, he had his goon steal the other half of the heart necklace from the grave in New Mexico. Now that we know that the necklace was a gift from Clint, and that Echo is obviously Rex's mother, could it be that Clint is Rex's father? Or is Charlie somehow part of this? We will find out more as next week progresses, I promise you!

Don't forget to join Soaps.com on Twitter @soapoperafan and Facebook for scoops on all other soaps, Glee, Grey’s Anatomy and Vampire Diaries. I'm also on Twitter @AmyMistretta so follow me to stay updated on the latest Llanview news!

Have a Happy Halloween! I'll be rocking out with the Goo Goo Dolls but will see you back here next Friday for another week's worth of Amy's "One Life In A Week."