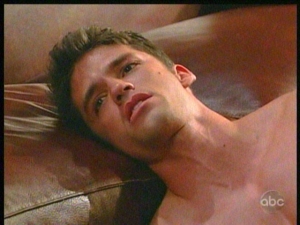 Who is Echo, really? (Soaps.com)

I think it’s safe to say that the days of Greg doing Eli’s dirty work are over. This week was all about shock value in Llanview. Some were back from the dead, mysterious clues from the past turned up, major admissions surfaced and… let’s just dig right into it, there’s too much to name off!

Wouldn’t want to upset your mother.
A little ‘what goes around, comes around’ reached Ford’s doorstep on Monday… If you haven’t seen Asa in Clint yet, you did this week! The entire scene when Clint had his thugs knock Ford around for what he did to Jessica was true to Asa form. Not only did Clint set out to send Ford a message, he covered his ground by not leaving any visible bruises, warned Ford not to tell Inez of his beating then grabbed Ford’s beer on the way out! One for the road! Though I don’t condone violence, and do think Ford is trying to change, it’s safe to say he had it coming. However, not so much for what he did to Jessica, because I think even at her reverted age she was old enough to make her own decisions, but for what he did to Langston, and even Hannah, prior to him bedding Clint’s daughter. At least Ford was able to keep the job Clint got back for him and has continued on his path to redemption. It gave me a major chuckle seeing the shock on Langston and Hannah’s face when Ford was claiming he wanted Hannah back in order to secretly get information on Starr. I really like that Ford, Langston and James are working this new angle together.

Nice try, Starr.
I’ll give Starr credit… It was a good idea to send the baseball-a-gram soaring through the window. But I knew the second it broke through the glass that Hannah would magically appear and gain access to it. As a mother, I cringed when crazy Hannah was holding and talking to Hope. I realize Hannah had a gun but considering how unstable she is, I might have tried to wrangle it from her. Then again, with a small child in the room, I’m not so sure it would’ve been a good idea.

I was nice to him, right?
It was nice that Todd took time out to be nice to Nate in his own little way. Hell, Todd may have even reached a milestone just by concerning himself with Nate’s feelings. I felt bad for Todd when he was talking to Tea’s ashes, promising that he would bring the girls home. If only Todd knew Tea was in need of rescuing too.

Oh my God, you where there the whole time?
Can you imagine being in Dani’s shoes? The girl has been scared out of her mind and hasn’t even really had time to grieve her mother’s death. And with Blair in the mix… She is a mother, so I can’t fault her for going behind everyone’s back in an attempt to save her kin. Remember, she thought Starr and Hope were in that warehouse too. Next week will bring us some exciting scenes involving many. However, the outcome of Eli’s reign of terror might just be too much for some to handle…

Bigger skeletons in Echo's closet?
Wow, after this week, the wheels in my head are really starting to spin in regards to who Rex's parents are. This could be really off the wall but is it possible that Clint and Echo had a child? Rex? Clint seemed to have known about Echo's trip back to Llanview shortly after she first left. And remember, I said last week that I saw something deep in Clint when he came face to face with Echo. If we are to look back at Otto's story about Rick and Lily maybe Clint was the love of Echo's life? Maybe Asa was the big meanie who forced Clint to give her up for the sake of his marriage to Viki? These are questions that are consuming fans, but I'm just not buying these scenarios. And where does Charlie and apparently Jared fit into all of this? I just hope the show doesn't try to rewrite history because Echo's Llanview past is nothing like they've made sweet Lily out to be. Hell, maybe Lily was real and Echo is just a 'big nothing' in this mess. Do you have your own theories on why Echo had the necklace? Why she got so emotional when putting it around her neck? Vote them through our Half-Heart Necklace Poll.

The big Evans family secret.
Finally, who Destiny had thought were her parents informed her that they really weren't after all. In fact, Greg's her father! Next week, we will find out more details... Let me warn you, Greg has another big secret in his own closet.

Don't forget to join Soaps.com on Twitter @soapoperafan and Facebook for scoops on all other soaps, Glee, Grey’s Anatomy and Vampire Diaries. I'm also on Twitter @AmyMistretta so follow me to stay updated on the latest Llanview news!

Do something fun this weekend! I'll see you back here next Friday for another week's worth of Amy's "One Life In A Week."

Interview: One Life To Live's...