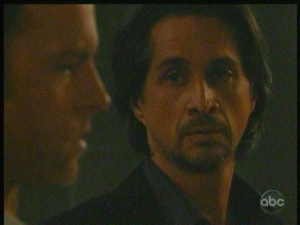 Is Ford a changed man? (Soaps.com)

Kidnappings, visits with old frienemies, and secrets were revealed in full swing this week. Can I tell you how happy I was when Greg finally admitted that poor Tea was alive? Let’s see what else kept me watching…

I will kill him and there will be nothing you can do to stop me.
I really enjoyed the scene between John and Todd. Over the years these two have been at each other’s throats, so it was nice seeing John try to be there for Todd. Todd being Todd gave John forewarning that he’d kill Eli if he hurt his girls… We’ve seen John prevent others in the past from facing charges and I can honestly say I think he would’ve covered for Todd had this scenario played out. John is about to become a father… Though Todd may have gone overboard to protect his kids in the past, I think John can finally relate to why Todd did some of the things he did.

Eli, thank God.
I thoroughly enjoyed the kidnapping scenes with Starr, Hope, Dani and Eli. Starr really impressed me by trying to calm everyone down, including Eli. And little Hope has really grown up, hasn’t she? Each character displayed their own separate hysterics, which complimented the others. I have to say, the eeriest I’ve seen Eli to date is when he came upon Tea and found out what Greg had done to save her. Off to the trunk Tea went… Even though she was a bit disoriented I wonder why she didn’t recognize that it was Starr’s trunk Eli had shoved her into. In any case, Dani got the shock of her life when she came face to face with Tea. Let’s just hope everyone gets out of this alive so we can witness Todd’s look of shock as well.

A new brand of psycho.
Well, my bad for thinking that Hannah could possibly turn over a new leaf. All we got this week was a new brand of psycho. Hannah had plenty of opportunity to come clean and save Starr and Hope but she didn’t. And how about Cole… he had some nerve attacking James when he was more concerned over Hannah than being with his own family. In the end, with Hannah involved, things are about to get even crazier for everyone… Don’t say I didn’t warn you!

Stepping it up a notch.
Hannah may be reverting back to her old ways but Ford really stepped it up this week. First he grew a conscience by admitting that Hope's kidnapping triggered some buried feelings for Jessica's unborn child, which could be his. Then he went to comfort Langston but stepped back when he realized she was in good hands with Markko. Keep it up Ford, I'm starting to really like you again.

Dropping the ball.
I'm sorry, but Natalie scored a big fat F this week in police protocol for not telling John about Greg's remark ASAP. Greg had just mentioned Tea's name and Natalie didn't think it was important enough to interrupt John with the details, who just happened to mention that Greg had a mysterious patient at Cherryvale? Nope, instead, what did she do next? She let John rush off then proceeded to try to pull the truth from Greg herself. Is she trying to move up the ranks from forensic investigator to lead detective? Better reread the Llanview PD rulebook, Natalie, because you really dropped the ball on this one.

Secrets never stay buried.
Even though Greg's secret wasn't revealed we now know that not only does Mrs. Evans suspect to know why her son helped execute the plan of a murderer, Greg's father knows why as well. While I was leaning toward Destiny being Greg's daughter, now I have to wonder how Shaun falls into this equation. No matter what, if Greg or Shaun is her father, I think Greg had many other options in how to protect Destiny from the truth without going to the lengths he did, especially since his parents know the truth as well. Sure, it would've taken Destiny time to get over having been kept in the dark. But to partner up with the likes of Eli? A bit too farfetched if you ask me.

How about a kiss for an old squeeze?
It was clear that Clint was irritated by Echo's presence but did any of you get the feeling that he still held something for the woman who'd caused him so many issues in the past? There was something about the way Clint looked at Echo that had me wondering if there was still some chemistry between them. Some are speculating that Echo could be Rex's mother but the possibility just doesn't sit right with me. Rex's mother was supposed to be this gentle soul who practically died of a broken heart. Unless there's some deeper secret, I can't imagine Otto lying to cover for someone like Echo. I enjoyed Echo's visit to Dorian's and love that there's someone new added to the Dorian/Viki mix. How would you like to see these three strong women deal with each other? Vote in my Dorian, Echo and Viki Poll to let me know.

Have an awesome weekend! Join Soaps.com on Twitter @soapoperafan and Facebook for scoops on all the other soaps operas, Glee, Grey’s Anatomy and Vampire Diaries. I'm also on Twitter @AmyMistretta so follow me today to stay updated on the latest Llanview news!