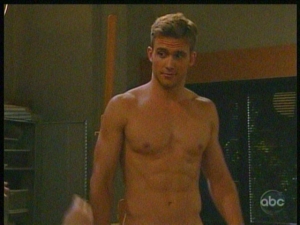 In some scenes this week I wanted to push open some doors and say, “In here, she’s alive!” In others, I wanted to stand in front of doors and say, “Don’t go in there, you can’t really trust she’ll stay quiet!” And on one occasion I wanted to shut the door and say, “Well, hello there!” Oh what I’d give to be able to run around free in Llanview for just one day…

Oh, those balls!
What a fun scene that was with Gigi and Cris’ naked model Joel. Not only did we get to see some fresh eye candy, we got to watch Gigi get all hot and heavy under the collar. I was rolling when Joel asked Gigi if she wanted him to do anything special with ‘the balls’. When Gigi looked down then noticed Joel pointing to a basket of balls, I laughed out loud when she replied, “Oh, those balls!” Let’s hope Cris brings Joel back again, minus the basket of ornamental balls, of course!

Take care of yourself.
Bravo, Markko! Though the pain was still evident in his eyes, he handled his run-in with Langston well. I don’t get off on the pain of others, but I found it pleasingly appropriate that Langston was privy to the news that Karen [aka Llanview’s old pizza delivery girl] was now playing ‘add the toppings’ with Markko. What comes around goes around. Though Langston has been burned by Ford, who indulged in a few of Karen’s extra toppings, she officially felt the burn from someone she hurt who truly loved her.

You’re a miracle worker, Greg.
Oh, Tea, you have no idea… At first I had a real issue that Tea didn’t push harder for answers from Greg. I had to sit back and remind myself that Tea has no idea how long she’s been out and has no reason to suspect Greg’s underhandedness. I loved seeing Greg quiver in his expensive loafers while Todd dragged him off to testify on his behalf. Too bad Todd had no idea Greg would be the one to help Ross get custody of Dani. But you know what? I get it… Greg wants to do the right thing, which is to get Tea back to her family and rectify his wrongs. However, Greg is no mastermind, which means his plan isn’t going to go smoothly without someone, in this case, Dani, being added to the injured list. I’d like to know who you think Dani belongs with. Let me know through my One Life to Live: Dani Custody Poll. On to Eli… By now we know that Eli’s most dangerous when he’s backed into a corner. Really, what does he have to lose? It’ll be interesting to watch how everyone scrambles to make sure the situation turns out to their advantage, especially now that it’s been announced that Terrell (Greg) is leaving the show.

Dr. Levin's biggest referral mistake.
I know doctors are supposed to live by a code of ethics through doctor/patient confidentially. But do any of you get the idea that Marty is a bit more curious to know what Brody's keeping from Jessica for reasons other than simply to analyze her new patient's inner struggles? I will give Marty credit, she's always been a professional. However, if she figures out that Natalie could be pregnant with Brody's baby, I don't think she's going to be able to pass up the chance to make John privy to that information. Do you? Vote in my Marty's Suspicions poll to let me know.

Is that an Echo I hear?
We got our first look at Echo today. For those who didn't watch the show back when she caused issues for a few Llanview residents, which she plans to do again, visit Echo's Character Profile for the details of her past. No matter what the character brings with her storyline I'm just looking forward to seeing the amazing Kim Zimmer back in the role!