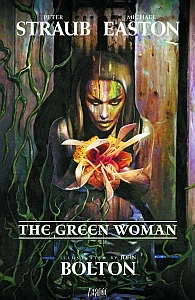 TV Guide is reporting that Michael and Peter surprised fellow Llanview star Robert S. Woods (Bo Buchanan) by dedicating “The Green Woman” to him! They wanted to celebrate Robert’s time as a former Vietnam War Green Beret, which inspired them both.

Soaps.com first brought you details of Llanview actor Michael Easton’s New Novel last October. We are excited to report that his latest graphic novel, which he penned with famous author Peter Straub, will be hitting shelves very soon! Though “The Green Woman” is available for pre-order now, look for it in bookstores everywhere officially on October 12.

The novel surrounds the character Fee who is preparing to end the bloodshed that his life, which has been devoted to death, has created. However, things don’t always work out the way we want them to…

Please keep an eye on Michael Easton’s Events where we’ll post any upcoming book signings. Soaps.com is on Twitter @soapoperafan and “Like us” on Soaps.com’s Official Facebook Page where we serve up soap news daily, hot from the presses!

Interview: One Life To Live's...