Happy Halloween from The Manning’s! 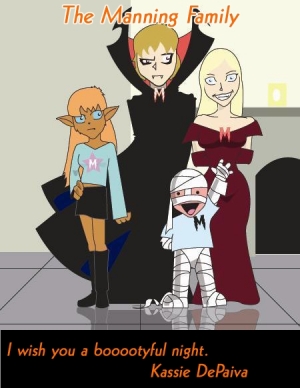 It’s that time of year again, fans, a time when you need to not only bundle up against the cold but against all the ghouls and goblins out there!

While every soap family is involved in their fair share of evil doings, I think we can all agree that One Life to Live’s Manning family is notorious for more tricks than treats! However, they aren’t always handed out in a vindictive way…

First we have Todd Manning (Trevor St. John) who has definitely been involved in more controversy than all of Llanview put together and just can’t seem to resist the urge to break all the rules along the way!

Then there’s the beautiful Blair Cramer (Kassie DePaiva) who has been a Manning many times over and doesn’t think twice about fighting for her family – no matter what it takes!

Remember the saying, “The apple doesn’t fall far from the tree?” This brings us to Starr Manning (Kristen Alderson). Although the oldest of the Manning children has had to grow up fast, starting out as a reptile loving tot, Starr has committed her fair share of tricks throughout the years, taking after her dear old dad, but has grown up to be a feisty young woman – clearly a well-obtained trait from her mother Blair!

Though young Jack Manning (Carmen LoPorto) has yet to explore his ‘Manning’ gift of getting in and out of trouble, he’s sure to have learned a trick or two just in case the opportunity should call for one!

We can’t forget the newest Manning destined to be enveloped into the fold, little Tommy (Jacob Cook and Luke Kendler Clodfelter), who will surely have a new name by the time he’s returned back to his biological father, Todd – or maybe not…

If Tommy does find his way back into Todd’s arms could it be that this little Manning will change things for the Manning family forever? Will they change their sometimes ‘shady’ ways in the name of shielding this little boy from all the evils in the world? Or will Todd and the rest of the gang have one more ‘trick’ up their sleeves – a few more tricks than treats? We’ll have to watch and see!

Along with Kassie DePaiva (Blair), who sent Soaps.com this cute Halloween card from ‘The Manning’s’, Soaps.com wants to wish everyone a safe and happy Halloween!

Erin Torpey: Where Is She Now?