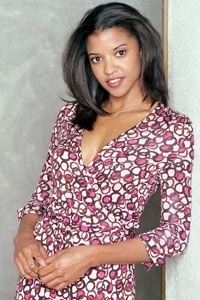 Ever since fan favorite Renee Elise Goldsberry decided not to re-sign with the show last April, her One Life to Live character, Evangeline Williamson, has been lost in a coma, leaving her on-screen family and friends at a loss and her fans begging for her to come back! Although no word of a return has surfaced, fans can now catch the beautiful actress in the new Stephen Schwartz and Joseph Stein production, “The Baker’s Wife!”

In fact, not only did Renee Elise land a part in the York Theatre Company’s forthcoming production, she nailed the lead role of Genevieve! Directed by Gordon Greenberg, the story will take place in a small French village surrounding the life of a young woman who leaves her older, very generous baker husband for a much younger, sexier man.

No stranger to the stage, Renee Elise originated the role of Nellie in “The Color Purple,” starred as Nala in “The Lion King” and appeared as Sylvia in “Two Gentlemen of Verona.” Most known for her television credits, including a singing role on “Ally McBeal” from 1997 – 2002 and the much loved Evangeline on One Life to Live from 2003 - 2007, Renee Elise has also appeared in a handful of movies – her latest playing Drea in “Pistol Whipped,” set to be released in 2008! As a singer, Renee has performed with a variety of artists such as Barry White, Patti Austin, Al Green, Rod Stewart, Yolanda Adams, Whitney Houston, Mariah Carey, Brian McKnight, Jeffrey Osborne, Faith Hill, Barry Manilow and Vonda Shepherd.

So fans, for those who have missed seeing Renee Elise on your favorite daytime soap, don’t miss your chance to catch her onstage starting October 26 – 28, 2007! So far, five performances have been scheduled:

Where: Theatre at Saint Peter's at 54th Street, east of Lexington Avenue

Soaps.com wants to wish Renee Elise all the best in her new venture! Although we miss you dearly in Llanview, we can’t wait to watch you shine on stage in “The Baker’s Wife!”