Who's Your Daddy?
The scene in the living room at Llanfair when Viki found out Natalie was pregnant was hysterical. "Oh Brody," Viki cheered. "You're going to be a father and an uncle at the same time!" If only she knew… I find it a bit hard to believe that Ford and Jessica had sex. The viewers were privy to the scene, after all… Ford must be what some would call a 15 second-man because that had to be the fastest sex I've ever seen! One second they're climbing into bed, he's kissing her then wham! Jessica lost it due to her memories flooding back. That was definitely a close call when Brody walked in on Jessica obtaining information about a paternity test. I have a feeling Brody's going to end up getting the short end of the stick on this one. Or maybe not, maybe he'll become a dad after all. Just not with the right sister.

Note To Ma...
I loved it that David put the bug in Nora's head that Bo and Inez seem to be working really well together. Even though Inez has her hands full trying to win back the trust of her sons [too bad she didn't realize she'd tried to hire the man who almost killed Ford to defend him] I could picture her being a real thorn in Nora's side.

Clint Wants His Stripper!
I laughed out loud when David blackmailed Clint into telling him the truth about his relationship with Dorian. "You want the stripper, don't you?" David taunted. Frankly, I wish there was some way Clint, or the show, could lure Kim back to Llanview. I enjoyed her character! In any case David and Dorian finally got down to business and decided to get married. Do you think they'll go through with it? Vote in my David and Dorian Marriage Poll to give me your thoughts. I knew Eli was desperate to agree to the double wedding. If he only knew that Natalie had turned over evidence to prove that he's indeed the murderous Bennett Thompson I think he would've whisked Blair away ASAP! Hold that thought, he still might…

I'll be on vacation all next week but one of our great sub-writers, Allyson, will be here to deliver the recaps, news and next Friday's blog. Until then, I'll see you back here on August 30! 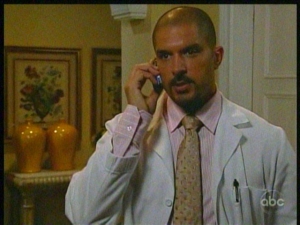 This week left me with a bad taste in my mouth. Between Greg’s connection to Eli, the possibility that Tea isn’t sick after all and the mess that is Ford, Jessica, Brody, Natalie and John… There wasn’t too much I was happy with. However, I did find a few good points in Llanview this week…

Dr. Jekyll and Mr. Hyde!
That would be Greg… This has got to be the worst storyline twist in a long time. Or could it be the most brilliant? I honestly don’t know where the writers are going with this one. First they turn Eli into a prototype of Mitch Laurence now they make Greg his accomplice? Greg was such a hated character when he first came to Llanview but fans warmed up to him… Now this? Either he’s totally off his rocker or Eli is blackmailing him with something pretty big. Either way if it turns out that Tea isn’t dying, and has been made to feel like and appear to be, someone’s going to meet their maker. Todd will make sure of it! Since Florencia Lozano Is Set To Exit things should be interesting. As I’ve said before there can only be one outcome when characters are changed for the worse before our eyes… Statesville bound, which means hasta lavista Llanview. The one good thing coming from this mess is the continual bonding between Todd and Dani.

I Believe You.
I actually felt really sorry for Hannah this week. She finally cracked under John’s pressure and confessed everything Eli’s done. Though she faked her breakdown, and had been a bit tweaked before she landed in St. Ann’s, I think there’s room for reform with this character. And if Cole finds out that she almost killed herself to protect him… that may be all it takes for a major shift to hit the Starr and Cole front and push Starr straight into James’ arms. Where she clearly wouldn’t mind being. I’m enjoying seeing this jealous streak in Starr and the way James counteracts it. There aren’t many scenes where James isn’t wearing that sexy challenging smile. Who could resist? On the other side of the coin… Cole’s defense of Hannah has surprisingly grown on me. It amazes me how quick this storyline has pulled me in the opposite direction from how I felt when it first started.