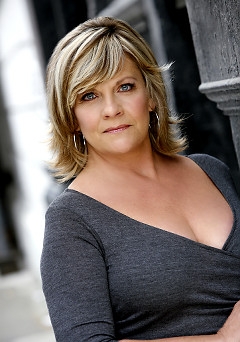 Get ready fans, we are about to have a great actress rejoin our ranks! Soap Opera Digest is reporting that former Guiding Light actress Kim Zimmer (ex-Reva Lewis) will be making her way back to Llanview! Kim will reprise the role of Echo DiSavoy, which she last appeared in back in 1983, after appearing as Bonnie Harmer in 1978. Look for Kim’s character to first appear on October 1 in a big storyline surrounding Clint (Jerry verDorn), Viki (Erika Slezak) and Dorian (Robin Strasser) to name a few!

For those who don’t remember Echo she was an exotic countess/photographer who had a fling with Clint. She actually blamed Clint for the death of her mother. After she lured Clint to a bridge, where they fought, Echo was thought to have fallen to her death. Dorian, who witnessed the exchange, led everyone to believe that Clint pushed Echo over the bridge. Viki later found Echo alive, who fessed up to her scheme.

Soaps.com welcomes Kim back to Daytime! Are you looking forward to her role? Please share your thoughts with us below! As always stay tuned to our One Life to Live Comings and Goings for all the latest casting news!

One Life To Live's Melissa Archer...

One Life To Live's John-Paul...