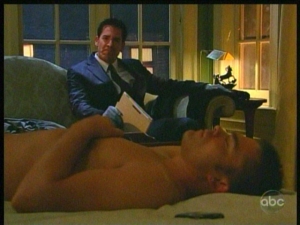 Summer is here and Llanview has been full of surprises. Not to mention heartache, confusion and big preparations for the future. While I can’t say I’m happy about all of it I can give you my take on the goings on. Here we go!

Big Mistake, Balsom.
Good thing Eli got to Rex before the hall of records guy. The information he had would’ve blown Eli out of the water instantly. Eli bought himself some more time and I’m really surprised that he allowed Rex to live. Even though he doesn’t know Rex’s work ethics very well he knows Kelly is determined to find her mother’s killer. And won’t stop until she does. Maybe Eli simply didn’t want to leave another dead body in his wake. Speaking of putting his ducks in a row…I have to give Eli credit, he’s one smart cookie. What better way to woo a Cramer girl, especially one who felt scorned, with jewels. It’s only a matter of time before Blair finds out the truth about her knight in shining armor. How do you want it to happen? Please vote your thoughts through my Blair and Eli Poll.

Get A Room!
I wish Dorian and David would get the hell off of MyFace and get a room. These two have been in and out of the sack more times than I can count throughout the years. Along with the genuine feelings they had (have?) for each other they were at times somewhat of a fun couple to watch. This back and forth bickering like a couple of kids not so much! However, now that Clint’s thrown back into ‘the Dorian mix’ David should be full of snappy lines next week during their double date!

You’re The One Who Stole My Son’s Girlfriend…
…and stole the money that almost got her killed. Bo is always such a card. Even through his down to earth take no bull manner he’s always out to help those in need. I enjoyed his interactions with Nate and his sympathy for Inez. I’m not sure what to make of Inez. I can see she was trying to protect Nate all these years but as a mother I agree with Ford… she’s had plenty of time to reach out to him. I can honestly see why Ford acts the way he does now. I hope the pain he’s feeling enables him to change though. He was such a fun character when he first arrived in Llanview!

How's That Boot Taste?
Tea, Todd, Dani and Nate's trip to New York City was a neat break from Llanview. Not only did we get to hear a bit more about Tea's childhood who could resist the scenes where Todd looked as though he would kill Nate at any moment. Classic Todd and props to Tea and Dani for putting him in his place! I had no doubt Todd would stand up for Cole, for Starr and Hope's sake as well as to look good in Tea and Dani's eyes. I was glad the scene closed with Todd making it clear that he didn't like Cole and warning that he owed him one. Again, classic Todd. Even though he's changed for the better he'll never be totally reformed. I wouldn't want him to be.

I Hate You!
No matter what Cole thought Starr was off doing with James Starr had every right to be upset after he confessed to almost sleeping with Hannah. Sure, Hannah manipulated him into thinking Starr was sleeping with James. However, one wrong doesn't make a right or give one party a free sex pass because a nutcase tells him his girl is off getting it on with the local reformed car thief. Bottom line, these two have allowed so many outside forces to interfere in what they have that I don't think they have it anymore. Even though Starr wants to forget about Hannah and make things work with Cole James isn't going away. And I don't think Starr's emerging feelings for him are either.

I Don't Like Your Hair.
I realize Natalie is dealing with a huge dilemma but that had to be the lamest excuse I've ever heard when she claimed her mood was due to the fact that she doesn't like John's hair. If her comment to John was a way to prepare fans for a possible hair change for Michael Easton in the soon future I'm going to scream. I love John's ruggedly sexy look and hope he doesn't take this opportunity to go short again just to challenge Natalie's moody excuse.

The Papers Are Signed. It's Time.
Monday we lost Evangeline. I don't buy it. For those who are saddened by this remember… It is a soap and even though the machines were shut off I wouldn't be surprised if Mrs. Williamson already had a plan with the doctors to have Evangeline shipped to another facility and hooked back up before she could take her last breath. She had been so against taking her off of life support and it would make sense that Mrs. Williamson only did it for show to get Layla back to Llanview or at least off the subject of Evangeline and her living will.

One Life To Live's Tika Sumpter In...