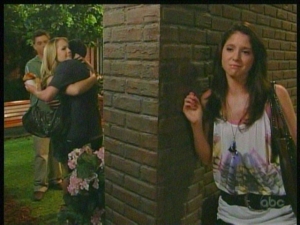 The past came back to haunt Cris. (Soaps.com)

Partner swapping, pregnancies and decisions… Oh my! It’s been another week in Llanview that didn’t disappoint, with a few crazy revelations thrown into the mix. Let’s take a look at how it all came across to me…

The Fab Four Is Reduced To Two And A Half.
Why two and a half and not three now that Markko’s gone? Though Langston and Starr have reconnected as Bffs I’m still not convinced that Cole and Starr are a solid two. Then with the Ford brothers thrown into the mix… I have a feeling we’re going to be looking at Cole as three’s company. And if Langston allows Ford to reposition himself, no pun intended, into her life, Cole could very well be a fifth wheel.

Sex With Me Would Be A Real Treat For You!
Not that I wanted to see David and Viki have sex, or Charlie and Dorian for that matter, but I hated it when the fun had to end. David’s dialogue had me rolling and Viki sure as heck did buck it up for the team by getting into bed with him. One thing I find hard to believe is Dorian turning Charlie down for Viki’s sake. Sorry writers, I’m not buying it one bit. Though these four have provided us with some hysterical scenes. Now that Viki and Charlie are taking off for vacation I just hope Viki convinced him to pack some of the seasonal swimwear! However, I can’t imagine Charlie looking as good in Santa Speedos and Trick or Treat undies as David! On another note Erika (Viki) usually takes some time off in the summer to go on vacation so I think this is how the show plans to work around her absence.

You’re Pregnant.
Oh how I did not want the writers to take us down this road. I really hated Jessica and Natalie’s matching dialogue split up between their separate scenes. And now both sisters are pregnant and not sure who the fathers are. Oh, the joys of Daytime! Please vote in my Dual Pregnancies Poll to let me know how you feel about this storyline. In any case my advice to both girls would be to have a private DNA test before telling John and Brody – or before making any rash decisions… Yes, Natalie, I’m talking to you! Now with Jessica spilling the news to Brody I’m not sure where this will take Natalie. Hopefully not to the nearest clinic because if John found out it would sure end any chance that these two had. I still think Natalie should have come clean with John about sleeping with Brody. I think they could have gotten past that seeing as John was still unsure where things stood with Marty. Even though he went after Natalie he did suggest to Marty that they try to make things work before she insisted on ending things.

You’re Not So Bad After All.
After months of watching Dani reject Todd her newfound admiration for him is so refreshing. Can you believe she admitted to Greg that she was her father’s daughter? Boy, Dani has come a long way! I get such a kick out of her interactions with Todd and thoroughly enjoy seeing Todd’s sensitive side where Tea and Dani are concerned. I really feel for Tea and Dani though. I could never imagine having to say goodbye to a loved one and not knowing exactly how much time I had left to do so.

I Need You To Know I Never Stopped Loving You.
I had no doubt that Cris still harbored deep feelings for Evangeline and I really think his guilt of being with Layla became very apparent. Aside from the fact that I really don't care about the character of Evangeline I have to give the writers props for bringing such a real storyline to the front burner. David Fumero was really able to let go this week and give viewers a look into who Cris really is. I would never want to be in the position that he, Layla and Mrs. Williamson are in. I find it sad how Layla's mother continued to lash out at her but can understand she's hurting. I'll admit, no matter what was left in a living will I'm not sure I could take someone so close to me off of life support either. Now that Lisa Williamson admitted, as hard as it was, that Evageline should be taken off of life support, and with Tika (Layla) going off contract, I'm not sure where this will take Cris storyline-wise.

You're Looking For Bennett Thompson?
We got a little deeper look into Bennett Thompson this week. Evangeline had his business card so it's clear he was a lawyer who simply changed his name. Or is he really Elijah Clarke and used the alias of Bennett Thompson in the past? I'm still not sure if John overheard Eli talking about Bennett when he arrived at the mansion. Maybe he did and just let Eli think he didn't. I know John will crack this case and we all know what that means for Eli. Either death, Statesville or St. Ann's. Now that Eli drugged Rex I really fear for what lengths he'll go to in regards to his upcoming marriage to Blair. In any case I totally dislike that the writers ruined such an appealing character!

One Life To Live On Location...