Phil Carey Back In The OLTL Studios! 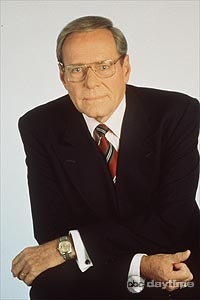 Fans of One Life to Live’s Phil Carey (Asa Buchanan) were crushed when the daytime veteran decided not to re-sign with the show back in April, after all parties involved were unable to come to a suitable contract agreement. Although some have suggested that Asa’s death on the show on August 16, 2007 was staged, I’m here to clear the air and deliver the bad news… It was not. I know, it stinks, but please don’t kill the messenger!

However, fans, we haven’t seen the last of Asa just yet. Phil Carey recently agreed to come back to the ABC studios on September 12, 2007 to shoot some final scenes to wrap up the ‘Asa’s Death’ storyline. Although we assume Asa knew that David Vickers was his illegitimate son, we are promised some jaw dropping moments when the rest of the Buchanan clan gets the news!

Soaps.com wants to once again express to Phil just how much we miss him. The show isn’t the same without you… Our resident grandfather, billionaire and not-to-be-crossed cowboy at heart!

Soaps.com Eases The Minds Of Fans