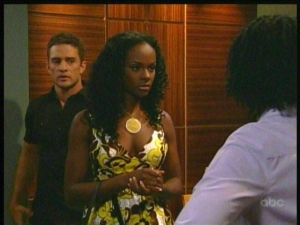 It was another complicated, twisted week in Llanview. Emotional confrontations led to heartbreaking admissions. Major decisions were made and new connections were hard to let go of. How did you feel about the week? Let’s take a look at my point of view…

You’ve Always Wanted What Evangeline Had.
I really felt for Layla this week. Her mother claimed Layla always wanted what Evangeline had but I remember something different about this family… Mrs. Williamson always put Evangeline first and Layla second with a whole lot of belittling handed out to her youngest daughter throughout the years. In the real world a decision whether or not to take a loved one off of life support would be a devastating one to make. However we are in soap land and if I had to choose, strictly for my preference, I wouldn’t want to see Evangeline come back… Pull the plug, leave her on life support, no matter to me, as long as she doesn’t return to Llanview.

I Think Hannah’s Faking It And Eli Put Her Up To It.
Eli’s not only good, he’s damn good but I think John is better and will uncover the truth sooner or later. If I had a hundred bucks for every time someone cried insanity in Llanview I’d own the town, if not the network, by now! Hannah ranting that she ‘did it all for Cole’ was a bit off the wall. What benefit to Cole was it to push Marty down the stairs, kill her baby or almost kill Ford for that matter?

So This Is Goodbye?
Even though Langston tried to play it tough where Ford was concerned I could see she was on the verge of giving in to him and may have if Markko hadn’t appeared in the park. Guilt took over, which led to her pushing Ford away and begging Markko for another chance. In my opinion Markko is right to cut his losses and leave for UCLA. Too much damage has been done for another shot at love with Langston. For those wondering Jason Tam (Markko) isn’t leaving the show. He’s simply taking the summer off to take part in a special workshop.

Do You Love Him?
I'm loving the way Todd's character is evolving throughout this emotional storyline surrounding Tea. The tragedy has given him a new look on life. That's an understatement! Urging Blair to accept Eli's proposal was groundbreaking for these two but Todd claiming Tea was the love of his life was earth shattering for fans who had fallen in love with him and Blair throughout the years. I being one of them. However, I can honestly say I'm okay with him being with Tea now. Maybe it's because of the emotional circumstances but they really work together. How do you feel? Please take a moment to vote in my Blair or Tea Poll. No matter what our preference is for Todd he's about to marry Tea and Blair has accepted Eli's proposal. However, will either woman make it to the altar with the different death sentences looming over their heads? Tea may know about hers but Blair has no idea about the man behind the 'good guy'. Good thing Jack's on to Eli aka Ross Rayburn in a suit!

Why Don't I Take One For The Team And Sleep With David?
Bo having to throw David out of the nest was hysterical, especially when Bo had to clarify, "You're an adult, at least you're grown." In the end the best part about these two is that the writers have made Bo really care about David as a son. I just wish Asa was still around. I would've loved to have seen David try to throw himself at his grouchy Granddad. Those would've made for some real comical scenes. Speaking of which Viki and Charlie's plan to make David and Dorian realize they still love each other took us on a comical ride of its own. Charlie's jealousy over Viki and David's friendship is still apparent. When Viki offered to take one for the team and sleep with David in response to Charlie's suggestion that he pretend to want to sleep with Dorian I was rolling in laughter! Leave it to Viki to try to give Charlie a lesson in the dos and don'ts of scheming at a time like this! And don't even get me started on Jessica and Natalie getting sick over Betty Crocker's, I mean David's, muffins. I think we can all see where this storyline is going…

How Could She Abandon Two Little Boys?
I tend to side with James when it comes to Ford abandoning him. Ford may have had plans to return for James but his insistence that he would have done so in time wasn't very believable to me. In Ford's defense it's apparent that the way he treats women stems back to his mother abandoning him, which is a very real reaction. James admitted his growing feelings to Starr and it's clear she feels something too. You can see it written all over her face every time she talks about James, even to Cole. In fact last week 55% of you voted that you'd like to see Starr give James a shot. I'll be anxiously awaiting how this storyline plays out. Especially now that Inez has been thrown into the mix. I really thought she was Rex's mother but it makes sense that she's connected to James and Ford. Remember her very first appearance when she sadly looked at the article in The Sun on Ford's beating? However, I'm not closing the book on a possible connection to Rex as well or one with another well known Llanview man. Stay tuned!