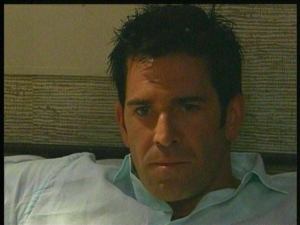 It was only a four day week in Llanview but it never fails… The show still delivered some great scenes! Let’s tear them up and see where I stood on the happenings this week…

Elijah Clarke = Bennett Thompson?
Just when I thought things surrounding Elijah couldn’t get any crazier the writers went off and made him Bennett Thompson! This has got to be one of the biggest twists in a long time, one I’m still trying to figure out. Since we initially thought Mitch had a hand in Melinda’s death as a way to get back at Dorian could it be Elijah is one of Mitch’s cronies? If you had asked me that in the beginning of last week I would’ve laughed in your face but now… Unless the slip of paper in the vase was meant to alert Kelly to Bennett for another reason? Let’s break it down… Did Bennett kill Melinda for Mitch, kill Rodney for seeing him kill Melinda, push Marty hoping Todd would be blamed so ‘Bennett’ could have Blair all to himself then attack Ford because he knew Elijah’s been Bennett all along? And where does Ross fit into this? Elijah was supposed to be his brother after all. Hell, I’m still stumped and I love it! Like I said last week working in this business, with so many spoilers at your disposal, it’s not too often that I’m shocked by a storyline.

Llanview’s Godfather…
I swear Todd Manning might as well be the head of Llanview’s mafia. Who else would be so cool and casual as to rant at Starr for getting involved with James while Bull had a gun on him and was waiting to make an exchange. Some would say he acted that way in order to distract Bull from seeing Dani and Nate but I don’t think so… Well maybe partly, but no one can deny that Todd knows his way around dangerous situations. See Dani, your father told you not to worry. He’s done this a million times!

Who Will Starr Turn to?
Do you think Starr will ultimately forgive Cole for doubting her in regards to Hannah? I have no doubt that she will but with James in the mix it may not lead this couple down the road Sole fans are hoping. I have thoroughly enjoyed everything surrounding James and can’t honestly say I’d be disappointed if Starr leaned more towards him rather than heading back into her rocky relationship with Cole. Granted she and Cole have a daughter and a lot of history but I just don’t think Starr is going to be able to forget the new connection she has with James.

Playing Favorites?
I realize some fans find John’s work ethics to be a little shady. He chose to turn the other cheek and not arrest Cole for jumping bail. If it would have been anyone else I’m sure John would’ve thrown them in the slammer, if it would’ve been best for the case. In this instance, and in John’s defense, I don’t think anything good would’ve come from making Cole pay for leaving the state. He wasn’t running away from the law or the charges against him and having Cole in jail right now would be pointless. Especially since Todd’s still out on bail.

Bringing On The Heartbreak.
Like the old Def Leppard song implies… Poor Dani finally learned that her mother is dying. I wanted to scoop her up and comfort her. Were you upset that Dani ran off after hearing the news or could you relate with how she handled it? Please take a moment to voice your opinion through my Dani's Reaction Poll. The kid has had such an unstable life as of late and I wouldn't wish this news on my worst enemy. Though this is sure to bring Dani and Todd closer I'm not ready to give up on Tea just yet. Many are wondering if Florencia Lozano (Tea) is leaving the show. If she is the Powers That Be still aren't commenting.

Charles, Charles, Charles!
If Dorian wasn't so annoying with her sayings she might be funny! I'm not sure where she gets off patronizing Charlie in front of his wife by calling him Charles over and over again. He's not a little boy and has never gone by Charles. At least Viki and Charlie got smart and decided to do something to break this bicker cycle Dorian and David keep going round and round with.

What's Going On With Evangeline?
For weeks Layla has been worried about her mother's reaction about her engagement. Telling her mother that she and Cris are engaged is going to be the least of Layla's problems. Next week is going to shift this storyline into full gear. I've never been a big fan of Evangeline's but I'm looking forward to the emotions Layla is going to be facing over her sister. Stay tuned!