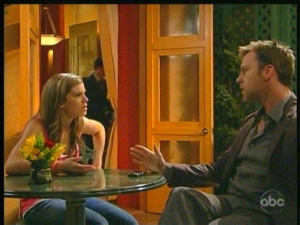 This week in Llanview was full of excitement including confessions, favors, some great eye-candy and one hell of a storyline shocker! Lets take a look…

Calling In A Favor, Manning Style.
It looks like we finally got somewhere this week where Dani and Todd are concerned. Some call her a hypocrite for only going to Todd when she needed help but I call it reaching out. If Dani could’ve went to anyone else she would have. She knew Todd had the means to get the money and act fast in order to save Nate. However, did Todd go about it the wrong way? Take a moment to vote in my Todd’s Way of Handling Situations Poll to let me know your thoughts. I personally like it when Todd takes charge and goes after what he wants. It’s one of the reasons Todd fans like him. Could you imagine Todd calmly awaiting word from John on the situation? Not! It still remains to be seen if everyone will come out of this unscathed. However, the writers have hit their mark on how they are handling this estranged father/daughter duo… Todd’s giving in a little yet being stern toward Dani while trying to win her heart. And how about James kissing Starr? Hot! I don’t know about you but I’m all for a James/Starr hookup! Next week is going to be filled with excitement inside that abandoned barn. I can promise you that! Hannah’s been arrested so that should hold us off until Tuesday, since the show is airing an encore episode on Monday due to the holiday.

Work and Play.
Natalie and John have decided to try their hand at working together again. I can respect Natalie’s need to get back into the crime scene, if you will, but I’m not sure working alongside John is going to be good for their relationship. It didn’t work in the past but here’s hoping things are different this time around. I did get a kick out of John asking where his kiss was at the station before Natalie left. That’s something John never would have made a point of doing in the past.

One Attitude Adjustment Coming Right Up!
I'm having a real issue with the way Matthew is acting as of late. Like we need another bratty kid in Llanview! Does anyone else think he's acting just like Clint acted after he found out about Bo and Nora? They're like two peas in a pod and these new attributes just don't work with either character. Good thing David's there to balance out the scenes with Matthew because I'm about ready to call in a favor and send the town bully [Wait, do we even have one besides Todd?] in to give the little rich kid an attitude adjustment. In Matthew's defense I don't think he would've sent Bull after Nate had he known just how dangerous the man was. How did you like Nora and Bo finding David's lady of the night in their loft, not to mention the getups David and Ford were wearing for the Fourth of July celebration? Classic scenes!

You Weren't Supposed To Live…
Honestly, did any of you suspect that Elijah was Ford's attacker? I had no idea, other than hearing a few spoiler rumors that I thought were totally off the wall! I'm not quite convinced how these two are connected and am more than furious that the writers have turned him into another Llanview psycho. On the flipside this is a huge twist and I have to give credit where credit is due... It's not every day that I'm able to be shocked by a storyline so I'm eagerly awaiting to see how this unfolds!

Rex and Gigi Go Extra-Curricular!
It seems my prayers were answered and Rex and Gigi have found something else to do besides play 'let's start over from scratch'. While I really don't care much to watch Gigi head back to school at least it'll take us out of the halls of Llanview High and into Llanview U. It's Rex who I'm really interested in seeing prosper. I always liked him as a confident PI, even when he was at his worst. I'm betting that one of his new cases will bring him closer to the truth surrounding his own parents. I still don't buy that his mother is dead. With Ford's dad being this big crook maybe he's somehow one in the same as the man who made Rex's father turn away from his mother. Remember, the casino guy? Now that's a thought!

Fallen Off The Brody/Jessica Bandwagon…
I felt my heartstrings pulled when Jessica had to remind Bree that she already had a daddy, one in heaven. I remember the days when I enjoyed watching Jessica, Nash and Bree together. Those two were my favorite Daytime couple. I even jumped onboard when Brody and Jessica fell in love and tried to pick up the pieces of their lives. However, after Jessica lost her memories things haven't been the same. I just don't feel the pull toward this couple anymore. It makes one wonder what they plan to do with them storylinewise when Bree (Jessica) takes her maternity leave. I was glad Jessica opened up and confessed to Brody that she had seen Ford on the night of his attack. Who knows, maybe this is the emotional backdrop I need to make me want to see them survive as a couple again.

For those who celebrate have a safe and happy Fourth of July weekend! I'll see you back here next Friday for another week's worth of Amy's "One Life In A Week!"

One Life to Live Video Promo: Who Is...