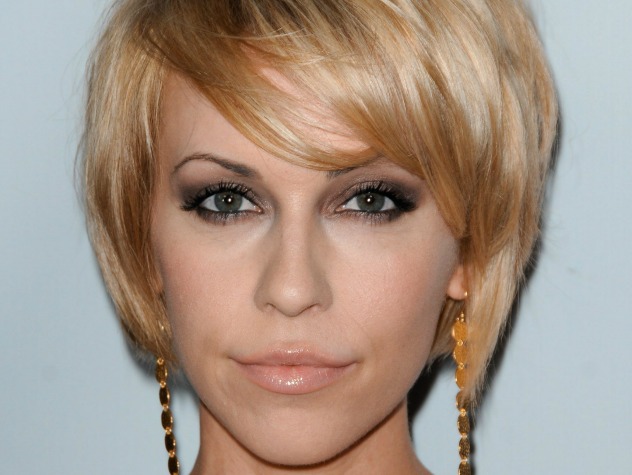 * Appeared in Llanview on October 24, 2007.
* Was a waitress at the Bonjour Cafe in Paris, Texas.
* Befriended Viki Davidson.
* Pretended Brody Lovett was Shane's father.
* Crashed Rex and Adriana's wedding!
* Brought Rex out of a coma.
* Was thought to have died.

Who's played Gigi Morasco Balsom over the years?

Gigi first came on the scene in October 2007 as a waitress in Paris, Texas. Though she befriended Viki Davidson, during her time of 'finding herself', Gigi has led a hard life but continued being a single mother to her son Shane, who had always been told that his father had died in the war.

After Gigi came face to face with her high school sweetheart, Rex, in Texas, she couldn't get him out of her mind. Though she briefly helped Marcie McBain hide out after kidnapping Tommy, Gigi and Shane moved to Llanview with Viki and continued to struggle with her feelings for Rex.

A constant thorn in Adriana's side, Gigi crashed her wedding to Rex, to profess her love for him, but was shocked to see Brody Lovett appear - the man she thought had died in the war, the one Shane was led to believe was his father!

Months went by that Gigi, Brody and Shane pretended to be a family, and after a travel through time to find Rex, Gigi broke the news that he was really Shane's father, which led Brody to suffer from post traumatic stress after Gigi informed him that Shane was going to be told the truth about his paternity.

Suffering from the effects of the war, Brody ended up shooting Rex and not even Adriana could bring him out of a coma. After Gigi told Rex the truth, her love awoke Rex, and little by little the couple began working to put their family back together - until Shane came down with Leukemia and her sister Stacy tore into town, and blackmailed her into giving up Rex in order to save Shane!

Though she made Rex believe she'd slept with Brody, Gigi, with the help of Schuyler Joplin, found out Stacy hadn't really been Shane's donor then Rex and Gigi reunited with a plan to stop Stacy once and for all!

Gigi faced her biggest lose after she delivered Stacy's baby, and they came to a truce, only to have Stacy die, as a result of drowning. After finding out that Schuyler was supposedly Sierra's father, their new-found relationship ended, and Gigi challenged him to a custody battle. She ultimately thought Sierra belonged with her father and turned the baby over to Kyle and Fish to raise.

Rex and Gigi worked to get their relationship back on track. After months of dealing with trust issues, they reunited. Gigi was there for Rex when he went on the hunt for his biological parents, which turned out to be Echo and Clint. Through all of the drama of finding out that Clint had switched Rex's paternity results to make it appear Charlie had been his father, little did Gigi know that Shane was dealing with bullies at Llanview High.

When Gigi and Rex found out Shane had been bullied by Jack Manning, it was almost too late. They managed to convince Shane not to end his life by jumping from the Llanview View High roof and worked to help their son, along with therapy, through the issue.

Things started to look up and Gigi accepted a marriage proposal from Rex. On the day they were to be married at City Hall, Gigi decided to confront Jack, who'd still been bullying Shane. Thinking Gigi had been Shane, Jack and his friends pushed and locked her in a room at Brad's parents' rental property. Gigi got a generator to work and in turn caused herself to pass out from the carbon monoxide in the generator's exhaust.

Though Rex found and saved Gigi, by the time he got her to the hospital, she was deemed brain dead, due to the amount of carbon monoxide inhaled. On July 29, 2011, Gigi was taken into surgery in order to have her heart donated to Clint. Rex only agreed to this after blackmailing Clint into turning over all of his assets in order for Rex to use Clint's resources to make sure Todd and Jack paid.

Rex later spotted someone with Gigi's face. Though she was made to believe she was Stacy, who'd taken Gigi's identity to take over her life, she was really Gigi, who had in fact survived the basement goings on. Her sister Stacy had been the one who died in her place.

Gigi and Rex came face to face in Texas, and with the help of Professor Del Fina, they found out the truth about the switch. Rex kissed Gigi, which brought her memories rushing back.

Rex brought Gigi back to Llanview and reunited her with Shane, as well as her friends, then proposed.