Finn is dead to me

That is not how it came across to me at all… their attacks on him was based on nothing but speculations! we know that Finn does not know anything about Sheila, because Jack never told him anything.

Finn is not being suspect, he is being consistent when it comes to forgiveness. Now that he is NOT praising and being Steffy’s doormat, NOW he is suspect?

So you’re saying Steffy should just embrace this known sociopath into her life no questions asked and put her children in harms way? You keep throwing Taylor shooting Bill in to jusrify Sheila’s years of violent and muderous crimes. And when you look at it I would be suspicious of Finn and his family too. Sheila is a master manipulator. Look at how she almost wormed her way back into Eric’s life the last time? I’m sorry but I would understand why they would be weary of the Finnegans especially Jack. He kept quiet about Sheila so that from.the outside looking in is a red flag. Finn suddenly having to tale a call has to go to the guesthouse where Sheila waits in the shadows and then he returns from making sais call with Sheila in tow announcing her connection to him Again from the outside looking in very suspicious . Finn’s obliviousness to his wife and her family’s reaction to his long last mother. Yes the communication between Steffy and Finn was not what it should be considering what they 've been through but as excited as Finn is to meet his birth mom I would have at least noticed the reaction of everyone in the room especially my wife’s who was literally looking like she was going to blow chunks or pass out to at least ask " Steffy what’s wrong?" Especially being a Doctor so yeah I would be a little suspucious and then there’s the fact that Sheila knowing she’s unwelcomed still shows up on that day of all days knowing her obsession with the family so yeah honestly I could see why Ridge would be weary of Jack and Finn. Li not so much but seeing she is Jack’s wife and the adopted mother it kind of makes sense because why would Jack keep her out of the loop about Sheila.

Not once did i say she should 100% embrace Sheila. And i’m well aware of her history.

Steffy should however not provoke a problem, when there currently isn’t one. That is why Sheila smirked. Why the unnecessary slap? She pulled the same stunt with Wyatt/Quinn. And if she keeps behaving like this, she does not deserve a “perfect” MIL…whatever that means.

Why do you think Flo and Quinn get along fine? It’s not because Flo always agrees with Quinn, because that is not the case. It’s about balance and compromise. And if Steffy loves Finn, she would do that too.

I would not be shocked if Paris and Sheila get along too. I almost want to bet money on this.

Someone please tell me what Finn’s motivation would be to lie to Steffy about Shelia? Money? Nope. Fame? Nope. He is a successful, gorgeous doctor who has been shown to love Steffy unconditionally. Something she has NEVER had from any other man in her life.

I don’t get it either…

I get what you’re saying but try to look at it from the perspective of the characters and not as the audience. While we the audience know that Finn really is oblivious to who his biological mother is from Ridge’s view as Steffy’s father it would look suspect. After all Sheila did wait until this specific point in time to make herself known and Finn suddenly disappears to make a phone call and then re emerges with Sheila in tow. Given the history and Sheila as the grand schemer and manipulator I could see where Ridge would be cautious because let’s be honest as much as Steffy and Finn profess to love each other had it been known sooner they probably would not have lasted so him bringing her there and making that revelation at that particular moment would look suspect. Then there is the fact that Jack knew Sheila was Finn’s mother and kept it quiet even from his wife and claiming to know there was bad blood but the full extent of it is kind of a flumsy excuse. This is the technolgy age you could have found out more information so that is another red flag and the fact that while everyone is not thrilled to see Sheila and wants her gone his insisting she stay didn’t help his case either.

From Ridge’s point of view… Simple…

Finn’s motivation for lying to Steffy would have been to help his mother Sheila obtain the attachment to the Forrester family that Sheila has always wanted. Sheila is not sane and has been obsessed with Eric and his family for what literally amounts to years.

As I said in another post, Hayes is one attachment that Sheila can use to latch on to the Forrester family. But, as another poster reminded me the other day, Sheila’s ultimate goal is to be wanted and accepted into the Forrester family and to move and mingle in their circles. Hayes isn’t going to help Sheila with that. He is just a baby. For what Sheila wants…she needs Finn to stay married to Steffy. In Sheila’s crazed mind, as Steffy’s MIL, she gets in the door and feeds her obsession in a major way.

Finn became suspect because he is defying Steffy and her family’s wishes that Sheila leave their home and leave them alone. Finn became even more suspect with Jack’s revelation that he knew there was a potential that the “lunatic” stalker of the Forrester family might appear in their home and he said nothing.

I think Finn is great. But, what I do not see is how Finn is leaving doormat status. Finn is still a doormat. He has simply moved from being Steffy’s so-called doormat to being Mommy Sheila’s doormat. Ridge sees Finn’s firm loyalty to a woman that, frankly, Finn does not know. This makes no sense to Ridge so Ridge rightfully wonders if the Fennigans, Finn, and Sheila are all working some angle on Sheila’s behalf. 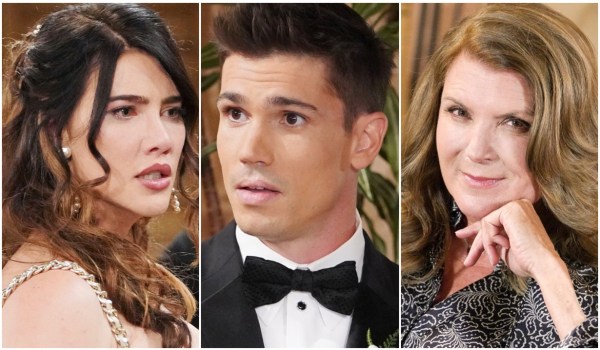 What part of his birth mother being a dangerous psychopath is the good doctor unable to grasp? It’s definitely in Bold & Beautiful’s wheelhouse to have someone behave out of character, or even…

Quotes from this thread inside!

Again bad as that was you can’t compare Taylor’s momentarily break from reality to Sheila’s 3 decades of premedidated violence,scheming and murder. The fact that you can compare these two womem is laughable. Taylor is no saint but to compare her to the likes of Sheila Carter. Really!

First and foremost I love reading your posts. What you just said makes a ton of sense. Maybe I’m letting my blind hatred of Ridge cloud my judgement lol. I think they all should be giving Finn the benefit of the doubt considering how much he has been through with Steffy. Thanks for the respectful debate.

You make some good points. Thanks

Thanks. LOL! My hatred for some of these stupid male characters has also been known to cloud my judgment. As for the show’s females, I figure that, if I had to have relationships with these slow-witted men, I would also be insane. Ugh.

No worries. Finn is getting the benefit of the doubt. He and his heinous mother are still in the house and the police have not been called to remove them. Also, nobody had to physically restrain protective big brother Thomas.

If Finn is going to hop off the porch and run with the big dogs (murderous Sheila), he might as well toughen up and learn to take his lumps. And, with Sheila, there’s always plenty of lumps. I just hope Finn manages to wake up before Sheila lands Finn in prison for one of her crimes. I had enough prison nonsense when Liam was locked up.

I know. He’s like all smiles and this is the best thing that’s happen to him while everyone else is in complete shock so much so that his own wife was on the verge of fainting and he seemed so oblivious to that. Brooke even dropped her glass of champagne. I’m like Finn come on please look.around and notice the room of unhappy people. Guess he’s just another pretty face after all.

Thanks and then when you look at it also there were other things that would seem strange as well. His avoiding the subject of his parents , his wanting to marry Steffy that particular day without no thought or time to get organized . Looking at from the perspective of the character there is a legitimate reason Finn’s chatacter would be called into question.

Finn is showing sadly he is more gullible than we know. Again he’s almost making Liam look like Yale Scholar.
Everything Shelia said was red flag. She’s obviously coming back for a reason and it’s to be back connected to the Forrester name. Now what else she will do idk but im hearing Eric will ask to get back with Quinn that it will probably have something to do with Shelia being back. But I dont want Quinn in that mess at all. She will get hit in the Cross fires.

The Forresters finally meet and are thrilled with the Fennigans…and then (surprise) in walks Sheila. And, worse, Finn is presenting Sheila as the best thing since sliced bread…even though everyone else in the room was positively catatonic with shock. Looking at everybody’s reaction, Finn says, “Good. You all know each other.” This isn’t shock Finn is exhibiting. True shock is what the Forresters were exhibiting. In Finn’s case, this is his deliberately ignoring the true state of affairs in order to make reality match his childhood fantasies over who his mother would be when he found her.

I know. I’m like Finn your wife is literally terrified to the point of losing conciousness and you’re grinning from ear to ear . Not even A Steffy what’s wrong and when they’re saying she needs to leave he insists she stay. I’m like WTH! I agree with whowver posted that he really needs learn how to read a room. You wife nearly faints from fright and you’re glued to the side of the woman whom you just met like 5 mins ago and you have nothing except her word that she’s your mother and yet you are suddenly joined at the hip. Come on Finn … THINK .

When Liam is looking like a Yale Scholar, that doesn’t bode well for Finn at all. Finn’s intelligence is running on fumes right now. He wouldn’t recognize Sheila’s red flags if Sheila said, “Listen, Finn, I am sending out a red flag.” Even Li who Finn loves (I think) and trusts pointed out that Sheila had an agenda and that Sheila ambushed his wedding. Finn just could not see it. He is just doomed.

I think our Quinn will be pulled into this somehow. That beauty is another powerhouse that really delivers the drama in the show. I can’t see the writers passing up the chance to put her in Sheila’s path to renew that old rivalry. Just the fact it hat Eric wants Quinn back makes her a target for Sheila. And, then there is the Quarter situation that Sheila can use against Quinn.